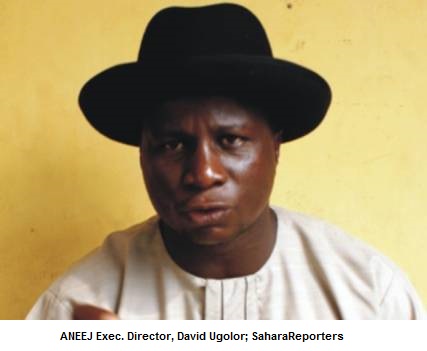 Even though there is a new report by the relevant Swiss authorities that 380 million USD amounting to some N75.2billion funds stolen by former Nigerian dictator, Sanni Abacha, are to be returned soon to Nigeria, ANEEJ is worried that all the conditions and agreements between the Swiss, Nigerian governments and the World Bank are shrouded in secrecy and conditions that do not have clear guidelines, and which run counter to transparent dealings.

“We are concerned that the precedence of best practice set in 2005 when the Swiss government opted to return N500million being part of the stolen monies in a very transparent and open process, involving all stakeholders is now being undermined with the planned return of N75.2billion Abacha loot to Nigeria by the Swiss Government, and to be ‘monitored’ by the World Bank,” Africa Network for Environment and Economic Justice (ANEEJ) Executive Director, Rev. David Ugolor said.

“Lessons from our monitoring of the repatriated 500million USD in 2005 under the Public Expenditure Management and Financial Accountability Review   (PERMFAR), reinforces our worries that the absence of any credible legal framework to deal with issues of stolen assets, as it stands in the present arrangement, sends the wrong signals and increases levels of anxiety of concerned civil society organisations like ours that have fought long and hard to ensure that repatriated funds from the Swiss government to Nigeria do not end up being re-looted”, Ugolor stated.

“We condemn allowing the Abacha family to go away with some of the loot which certainly fuels the culture of impunity in looting public funds.

‘ANEEJ calls on the Nigerian Finance Minister and Head of the Government’s economic team to come clean on the particulars of the transaction with the Abachas on one hand, and on the other hand ensure that it abides by the provisions of various international statutes in involving Civil Society Organisations working on this issue both at home and in Diaspora in the processes of repatriation and utilisation of the asset.”, David Ugolor said.

World Bank role in the monitoring of recovered looted assets to Countries of origins particularly Nigeria should not be used by the government to undermine the legitimate voices of the people to participate in designing and advocating a framework that will ensure that the recovered stolen assets are used transparently for the benefit of the Country.

We want a framework put in place that such repatriated funds are spent on projects and programmes that would be visible and appreciated by all Nigerians and serve as a disincentive to looting of public treasury.

We call on the World Bank and the Nigerian Government to make public the details of the negotiations and how they intend to monitor the use of the funds when and urge the Swiss government to continue to support the process leading to the repatriation of all monies stolen from Nigeria as a safeguard against a re-looting of the repatriated funds.

About ANEEJ: We seek to contribute to the emergence of a just and equitable African society through socio-economic and environmental rights protection, institutional strengthening and people’s empowerment.

NOTE: Details of our previous work and activities on PERMFAR can be accessed on our website, www.aneej.org on the following link: http://www.aneej.org/new/aneej-reports/