“We shall not be a normal people, until we have Jewish whores and Jewish thieves in the Land of Israel,” our national poet, Haim Nahman Bialik, said some 80 years ago.

This dream has come true. We have Jewish murderers, Jewish robbers and Jewish whores (though most prostitutes in Israel are imported by international slave traders from Eastern Europe through the Sinai border).

But Bialik was too unambitious. He should have added: We shall not become a normal people until we have Jewish Neo-Nazis and Jewish concentration camps.

The central news item nowadays in all our electronic and print media is the terrible danger of “illegal” African migrants.

African refugees and job seekers are drawn to Israel for several reasons, none of which is an ardent belief in Zionism.

The first is geographical. Israel is the only country with a European standard of living that can be reached from Africa without crossing a sea. Africans can easily reach Egypt, and then they have only to cross the Sinai desert to get to the Israeli border.

The desert is the home of Bedouin tribes, for whom smuggling is an age-old occupation. Whether Libyan weapons for Hamas in Gaza, Ukrainian women for the brothels of Tel Aviv or job seekers from Sudan – for good money, the Bedouin will get them all to their destination. On the way they may hold them for ransom or rape the women.

The Africans – mainly from North and South Sudan and Eritrea – are attracted by the Israeli Labor market. Israelis have long since ceased to do the menial jobs. They need people to wash the dishes in the posh restaurants, clean their homes and carry the heavy loads in the markets.

For years, these jobs were done by Palestinians from the West Bank and Gaza. After the intifadas, our government put an end to this. The Africans fill their place.

They are, of course, paid what Israelis consider hunger wages, but enough to enable the migrants to send money back to their families. Small sums of dollars look like fortunes back home.

To enable them to send the money, the migrants lead a dog’s life. Almost all of them are single men, crammed into dirty old houses in the slums of Tel Aviv and other towns, ogling the local girls, getting drunk for recreation.

The Israeli inhabitants of these slums, the poorest of the poor, hate them. They accuse them of all kinds of crimes, including rape, violent quarrels and murder. They also believe that they carry dangerous diseases which are almost unknown in Israel, such as malaria and tuberculosis. Unlike Israelis, they have not been inoculated at birth.

All these accusations are, of course, vastly exaggerated. But one can understand the Israeli slum-dwellers who have to live with poor foreigners with whom they have no communication.

In such circumstances, racism flourishes. The Africans are easily recognized by their skin. The usual racist verbiage – “They rape our women”, “They are all carrying deadly diseases”, “They are like animals” abounds, added to a special Israeli one: “They endanger the Jewish State”.

All in all, there are now some 60 thousand Africans in Israel, to which must be added about 3000 newcomers every month. There are also large numbers of (“legal”) Thais who work in agriculture, Chinese and Romanians in the building industry, Philippinos aiding the sick and elderly.

(A current joke: An old Palmachnik – member of the pre-state illegal military organization – attends a veterans’ reunion and exclaims: “Wow, I didn’t know there were so many Philippinos in the Palmach!”)

With Israel’s Jewish population amounting to 6,5 million, and Arab citizens making 1.5 million more, it is easy to depict the migrants as a terrible danger to the Jewishness of the state.

As a swamp draws mosquitos, such a situation draws rabble-rousers and hate-mongers. And we have no lack of these.

As if drawn by magic, within record time all the well-known fascist agitators appeared on the scene, inciting the crowd against the Africans and leftist “bleeding hearts”.

The most media attention was given to a Likud Member of Parliament, Miri Regev. Not satisfied with the usual epithets, she shouted that the Africans were “a cancer”.

This expression, lifted from the lexicon of Goebbels, shocked many throughout the country. Regev is not only a pretty woman, but also a former Chief Spokesperson of the Israeli army (appointed by former Chief of Staff Dan Halutz, of the disastrous Lebanon War ii fame, remembered for his remark that, when dropping a bomb on a residential quarter, he feels nothing but a “slight bump on the wing”.)

Regev hit the headlines with her speech and was rewarded with numerous TV interviews, in which she distinguished herself by using the language once attributed to fisherwomen. (No insult to fisherwomen intended.) She was, to put it bluntly, disgusting.

ABOUT DISGUST: I have a personal hobby. Every week I choose – strictly for myself – the most disgusting person in Israeli public life. For the last few consecutive weeks my chosen laureate was Eli Yishai of the Oriental Orthodox party Shas.

Shas is totally dominated by one person: Rabbi Ovadia Yosef. He hires and fires the party’s political leadership. His word is law. When the last leader was sent to prison for stealing, Rabbi Ovadia produced Eli Yishai from nowhere.

As Interior Minister, Yishai has served mainly as a conduit of government money to his party’s institutions. In all other functions he has failed dismally. It is strongly rumored that in his forthcoming report about the Carmel Forest fire, the State Comptroller is going to recommend his dismissal for gross incompetence

For Yishai, the anti-African hysteria is a gift from his God. After telling the public that the migrants are criminals, carry diseases and endanger the Jewish state, he declared war on them.

Now the whole country is mobilized. Every day, the number of deported Africans heads the news. Yishai’s special “immigration police” are photographed pushing Africans into police vans. Yishai himself appears daily on TV to boast of his accomplishments.

The Knesset is discussing a bill that would impose stiff prison terms (five years!) plus a fine of half a million shekels (100 thousand Euros!) on anyone employing an “illegal” worker. Fortunately this law is yet in the works and will not apply to the wives of the Defense Minister (Ehud Barak) and the Attorney General (Yehuda Weinstein) who were caught employing illegal migrants at their homes. (Their husbands, of course, knew nothing about it.)

Most of all, Yishai brags about the huge manhunt now in progress. Africans cower in their miserable homes, not daring to go out into the streets. At night they are alert to every noise, fearing the dreaded knock of the immigration police on their door.

Trouble is, most of the 60 thousand Africans come from Eritrea and North Sudan, to which the migrants cannot be sent back, because the Supreme Court has forbidden it. Their repatriation would put their lives in danger. This leaves only the citizens of the new state of South Sudan, which has been liberated with the help of Israeli military advisers and arms. They are now being rounded up, in the full glare of publicity, to be deported. 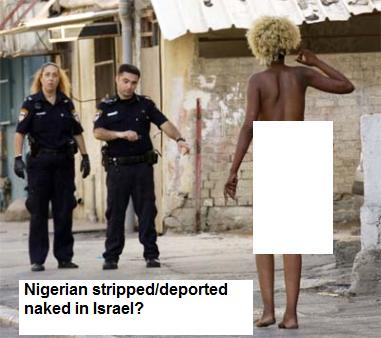 What about the others? The government is now feverishly at work building huge tent camps in the arid Negev desert, in the middle of nowhere, in which tens of thousands of migrants will be imprisoned for three years in what cannot but be inhuman conditions. Since no foreign country is ready to take them in, they will probably stay there for much longer. As of now, there is no water nor sanitary conditions, women and children (born in Israel and Hebrew speaking) will be housed separately. In the summer, temperatures will easily reach 40 degrees Centigrade. Life inside the tents will be hell.

Yishai and his colleague have a flair for laundered language. The migrants are called “infiltrators”, deportation is called “returning”, the prison camps will be called “residence camps”. Not concentration camps, God forbid.

I AM aware that in several other “civilized” countries, migrants are treated as badly, or worse. This does not comfort me in the least.

I am also aware that there is a real problem which has to be solved. But not this way.

As a citizen of a state that calls itself  “Jewish”, or even “the state of the Holocaust survivors”, I am disgusted.

I have heard innumerable times about Nazi Jew-hunts, as well as American lynch mobs and Russian pogroms. There is no comparison, of course, but the pictures are popping up in my mind. Can’t help it.

Our treatment of the African refugees and migrants has nothing to do with the old conflict with the Arabs. It cannot be justified with arguments that concern the war and national security.

This is Racism, pure and simple.

URI AVNERY is an Israeli writer and peace activist with Gush Shalom. He is a contributor to CounterPunch’s book The Politics of Anti-Semitism.