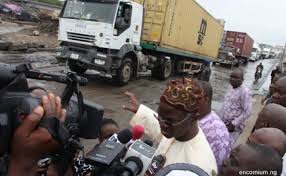 Commuters plying the Apapa axis of Lagos State may now have a breath of relief as Lagos State Government and Federal Road Maintenance Agency (FERMA) are concluding plans to tackle flooding on the road.

Tayo Awodun, an engineer with the agency told News Agency of Nigeria (NAN) that the flood was caused by the reclamation that was carried out on the site for displaced residents of Ijora Badia.

He added that cannals and existing drains would be expanded to cater for the resultant surge, and FERMA would work a design to solve the problem.

The Nation newspaper quoted him to have said: “The section that is bad, presently we have filled it up with boulders so that vehicles can still move on pending when permanent work would be done because we can’t work there until we get the water out.

“The government has decided to create a channel. It plans to build a new channel to direct the water to. But meanwhile, we had to put boulders to make it motorable for road users.”