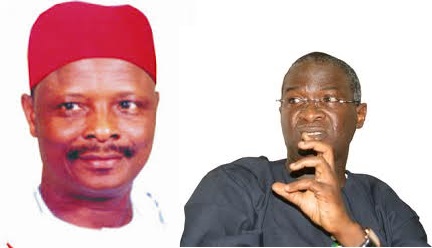 Strong indications emerged following yesterday’s defection of some governors in the G7 group and Abubakar Kawu Baraje led defunct splinter group of the Peoples Democratic Party, PDP to the All Progressive Congress, APC, – arrangements were being made by the opposition to have governor Rabiu Kwankwaso of Kano State and Babatunde Fashola of Lagos State to run for 2015 Presidential election.

Vanguard gathered that the party wants to take advantage of the performance of Fashola in Lagos and that of Kwankwaso who is a northerner and from a state with a very large population.

Not minding that they are both Muslims, the source said that it happened in 1993 when it was Moshood Abiola and Babagana Kingibe who are both Muslims and they ran for election and won, but was annulled. It was also gathered that APC may also beg governor Adams Oshiomhole because of his achievements in the state, his influence, popularity and acceptability by Nigerians to run for the presidency in the 2015 Presidential election.

Kwankwaso was one of the governors who finally dumped the PDP yesterday for the APC. He is known among other things for setting up his cell phone to personally receive sms messages from every ministry in Kano, thus keeping watch of their activities against any possibility of fraud.