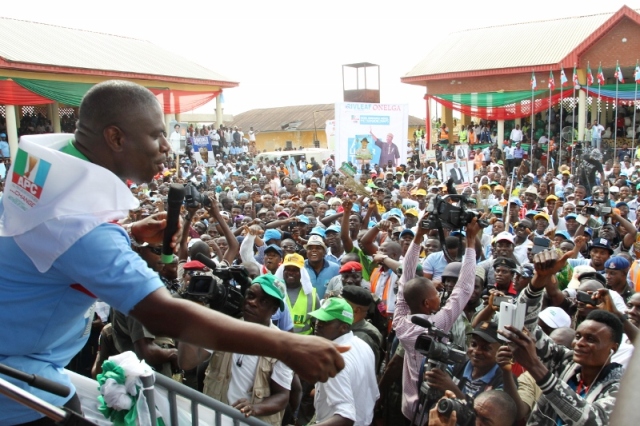 The Rivers State chapter of the All Progressives Congress has demanded the cancellation of the results of Saturday’s governorship and State House of Assembly elections in the state and the conduct of fresh elections.

In a petition dated April 12 to the Chairman of the Independent National Electoral Commission, Attahiru Jega, the party alleged that the Commission’s officials colluded with security operatives to compromise the integrity of the electoral process in virtually all the 23 local government areas of the state.

The APC alleged in the petition, signed by its chairman, Davies Ibiamu, that the electoral officers in almost all the local government areas withheld the unit, ward and local government result sheets and handed over ballot papers to the PDP thugs guarded by heavily armed soldiers, police and State Security Service operatives.

It said in direct contradiction of the INEC Chairman’s directive that card readers must be used for the election, the Resident Electoral Commissioner in the state, Geisla Khan, directed the electoral officers to ignore the card readers and manually accredit voters.

The party said in more than 70 per cent of the polling units where there were semblance of elections, the officials refused to utilize the card readers.

It claimed that the sole purpose of the refusal to utilize the card readers was to defeat the avowed objectives of the card readers which are the prevention of rigging through unlawful thumb-printing of ballot papers and writing of results for persons who were never accredited and who never voted.

The APC also said in most units the card readers were not issued to presiding officers.

“We submit that the failure and refusal to use the card readers in more than two-third of the local government areas in the state is, by itself, substantial, non-compliance and sufficient ground for immediate cancellation of the elections,” it said.

The APC also said in various petitions dated March 29 and April 1, it demanded the removal of Mrs. Khan and the lead of operations, Ekong Boco, on ground of abuse of office, bias and prejudice against it.

It however said “in spite of the proven weighty grounds upon which our petition was founded, and for inexplicable reasons, Mrs. Khan and Mr. Boco were allowed to conduct the elections with calamitous miscarriage of justice, which can only be remedied by the cancellation of the purported elections”.

The party noted that the shameful conduct of INEC officials it highlighted clearly defeated the objective for the Commission’s existence.

The APC added, “Majority of voters were disenfranchised and the will subverted because the INEC officials were compromised. A number of INEC officials apprehended with cash inducement received from the PDP Governorship candidate who allegedly paid N20,000,000 (Twenty Million Naira) as bribe to each Electoral Officer.

“It will be unconscionable to allow the outcome of a process so outrageously flawed to stand. The only fair and just conclusion that can and ought to be reached in the circumstance is that no elections took place in Rivers State.”

The party also said the elections in the state failed due to violence, killings and hijack of electoral materials.

It specifically stated that there were no elections in four local government areas, namely Abua Odual, Asari Toru, Akuku Toru and Gokana, because materials for the conduct of the polls were either destroyed in the cause of violence or the materials were never delivered to the polling units.

It said despite the obvious fact that there was no voting in the local government areas, INEC officials declared fictitious results.

The party said, “On behalf of the members of the APC and the electorates in Rivers State, we most respectfully request you Mr. Chairman to passionately consider the above and to order the immediate cancellation of the April 11th 2015 Governorship and House of Assembly Elections in Rivers State.

“In the interest of justice and fairness we demand that a fresh election be scheduled to be conducted by a Resident Electoral Officer and Electoral Officers (E.O) who, in your esteemed opinion are people of unquestionable integrity.”