Investigations reveal that Nigeria’s APC leadership has gone in cahoots with private banks, via the Godwin Emefiele-led Central Bank to pilfer billions of Naira from Nigerians daily via the legalized sale of foreign currencies by the banks at the black market rate.

NewsRescue discovered that whereas during the prior administration the banks were only allowed to exchange dollars at the official rate, currently Nigerian banks were employing the parallel market rate and exchanging Naira for foreign currencies to the millions of unsuspecting or otherwise desperate consumers at whatever the going rates are in the black market.

While the banks buy dollars from the Central Bank of Nigeria, CBN at the official selling rate of N197 as listed on the CBN website, the banks currently exchange the same at between 305–325 Naira per dollar, swiping off about N100 per $1 withdrawn!

For a withdrawal or foreign payment of $200 at the official rate, this should debit N39,400 from the consumer’s ATM card plus an additional ATM fee of N400, totaling N39800 at the official rate, however for the same transaction as repeatedly demonstrated from a variety of Nigerian Naira debit cards, over N61,000 was debited! The banks have been found to be selling dollars at the parallel market rate under the nose of the Godwin Emefiele-led Central bank and for totals of billions of Naira in foreign transactions daily, the private cabal-owned banks have been allowed by the administration who we have found are benefactors of the operation, to be robbing millions of Nigerians of billions of Naira every day.

On the receipts the banks concealed the fraud by ensuring not to list the specific charges and list the entire amount calculated at a black market conversion rate simply as the singular “debit,” and then put the transaction fees separate.

Tracking the exchange rates by Naira debit cards for several months, NewsRescue investigations found that the banks have consistently replicated the street rates in listed and hidden charges on receipts from foreign purchases or withdrawals; including ATM, POS and online transactions.

Tracing back this exploitation, we found that the practice of converting Naira at the parallel market rate has been ongoing for at least the past year with the banks continuing to exchange dollars for Naira at rates that continuously equal the street rates.

In November of last year, as contained in an earlier report, when the parallel market rate was N225 per dollar, the banks debited a single sum of N63,140 and an additional transaction fee of N420 for withdrawal of $280. This if calculated gave the banks an additional unaccounted-for extra N7,420 on this withdrawal in addition to the listed N420 transaction fee debit. If calculated, this again exchanged Naira at a total of N225 to $1 which was the black market rate at the time and not the CBN rate of 199. The total debit of $280 last November should not have exceeded N56,120. 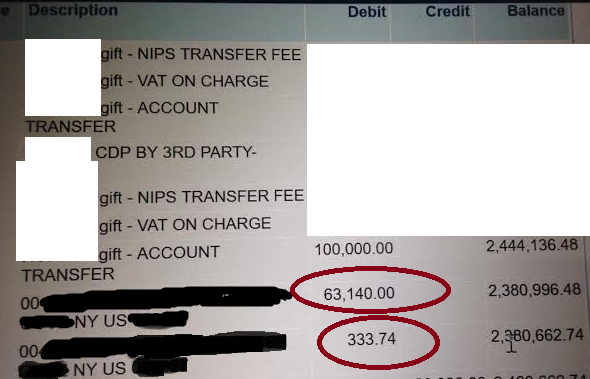 There have also been pages of discussions and complaints on popular Nigerian fora, but the authorities who are beneficiaries of the scam have paid no mind to the complaints on the politicians and cabal enriching scam being perpetrated in broad-day light.

The Central Bank has recently been media headlines for nepotism; illegally sharing up hundreds of delicious bank positions among top ruling politicians, with a list that includes a nephew of the nation’s president, families of Ministers like that of the Interior, Dambazzau, the nation’s inspector general of police, Arase’s daughter, a top APC don, Atiku Abubakar’s daughter, and also as reported, one appointment a piece was distributed to all members of the Nigerian Senate who either gave it to a family member or sold the spot.

Nigeria receives foreign exchange through oil trade and also from millions sent home by Nigerians abroad, one of the nations that send the most money home in the world.

The Nigerian government has limited access per individual to forex to $1000 per month and has been arresting travelers with more than one owner debit cards on the premise of reducing state foreign exchange utility. If the same cards are giving clients parallel market sourced dollars and not CBN dollars then how is the forex cap and ATM card clampdown justified?

The Central bank refused to comment at the time of this report.