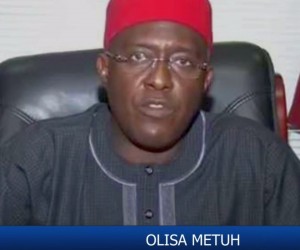 The opposition Peoples Democratic Party, PDP has inferred that the All progressive Congress, APC should be forced to remain in the gubernatorial contest with it’s late candidate, Governor Abubakar Audu or it should step out of the contest.

The statement was made by the party spokesman, Olisah Metuh who queried why the Independent Electoral Commission, INEC and Attorney general would authorize the party select a new candidate to replace the dead former contestant.

Governor Audu died day after election morning from allegedly sudden hypertension related diffuse hemorrhage. The APC party has meanwhile decided to select a new candidate to continue in the rerun.

“The party is shocked that INEC, a supposedly independent electoral umpire, could allow itself to succumb to the antics of the APC by following the unlawful directive of an obviously partisan AGF to substitute a candidate in the middle of the ballot process,” said a statement signed by the PDP spokesperson, Olisa Metuh.

“We are all aware that the two legal documents guiding INEC in the conduct of elections; the Constitution and the Electoral Act, have provisions for electoral exigencies as well as empower the electoral body to fully take responsibility for any of its actions or inaction without undue interference from any quarters whatsoever.

“We are therefore at a loss as to which sections of these two relevant laws, INEC and the AGF relied on in arriving at their bizarre decision to substitute a dead candidate in an on-going election even after the timelines for such has elapsed under all the rules.

“Consequently, the PDP rejects in its entirety, this brazen move by the APC and INEC to circumvent the laws and ambush the yet-to-be concluded election by introducing a practice that is completely alien to the constitution and the electoral act.

“The clear implication of this action of the AGF and INEC is that the APC would be fielding two different governorship candidates in the ongoing Kogi election, meaning that INEC would be transferring votes cast for late Abubakar Audu to another candidate, scenarios that have no place in the constitution of the land.

“Whereas the PDP, in honour of the sanctity of human life and respect for the dead, had since Sunday refrained from making comments on the conduct of the election, we can no longer maintain such in the face of the barefaced attack on our democracy.”