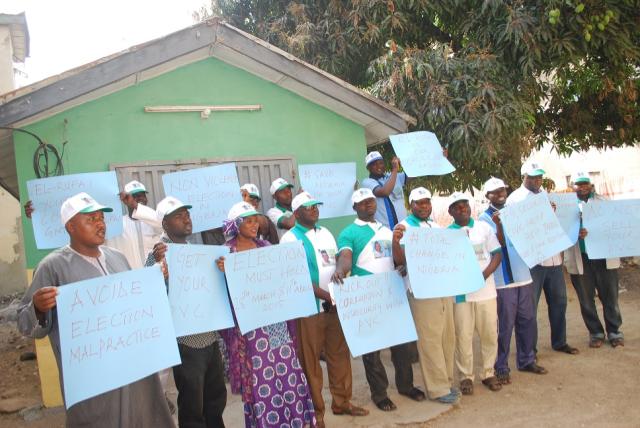 El-Rufai Youth Coalition today protested against any plan by presidency or INEC to postpone the March 28 – 11 April General election in the country.

The youth threatened to stop such a plan through peaceful  protests.

They also said that Nigerians want the election to hold on the exact date without any postponement.

” Save Nigeria with your PVC” Election Must hold in March” ” Kick against Corruption and insecurity with your PVCwe want total Change in Nigeria” El-Rufai is our choice” among others.

Coordinator of the group Comrade Balarabe Birnin Yero urged  Nigerians to ensure they collect their PVC before next month  election.

” We call on Federal Government, Security Agencies and Nigerians to give INEC Maximum cooperation to conduct free and Fair elections on28 March and 11 April 2015 as scheduled by INEC.

” We also call on Nigerians to collect their PVC, comply with the electoral guidelines during elections so that we can achieve successful and non-violence election.

” We call on our members across the state to give maximum corporation to INEC Officials.

” National,  international observers and to behave orderly during the election.

” Whoever caught involve in any election malpractice or violence will be held responsible,” he said.

The Comrade also reminded the youth on the need  to say away from any illegal act capable of causing violence during the elections.