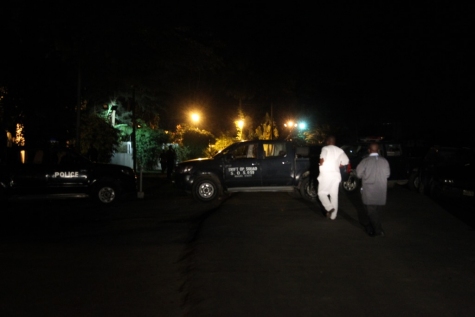 The Rivers State Chapter of the All Progressives Congress (APC) has unequivocally condemns the plot to link Governor Chibuike Rotimi Amaechi with an act of murder particularly as it relates to the accident involving the Majority Leader of the Rivers State House of Assembly, Hon. Chidi Lloyd, that resulted to the death of Police Sergeant Urang Obediah and one Kingsley Ejeuo.

Rivers State Interim State APC Chairman, Chief (Dr.) Davies Ibiamu Ikanya, said in a statement issued today in the Rivers State capital, Port Harcourt: “As much as we feel sad over the death of these two Nigerians, we are shocked by the attempt by the State Commissioner of Police, CP Joseph Mbu and his promoters, to link Governor Amaechi with the accident that led to the said deaths. It is regrettable that CP Mbu, who is on a mission of destabilization in Rivers State, could go to the extent of trying to frame up a sitting Governor just to satisfy his masters in Abuja. Governor Amaechi has proven to all and sundry that he is a true democrat. It is not in his character to either spill the blood of any human being for any reason or to support any such action. As a Christian, Governor Amaechi believes in the sanctity of human life and would never encourage or support any such diabolical act.”

Dr. Ikanya condemned the unprofessional behavior of CP Mbu “for creating the impression that Governor Amaechi wanted to plot the escape of Hon. Lloyd from arrest by flying out with him in a non-existent private jet.” According to Ikanya, “This is yet another proof that Mbu is yet to finish his untoward task in Rivers State and the earlier he is called to order the better for everyone.”

The Rivers State APC Interim Chairman described the year 2014 as one of emancipation and consolidation for the people of Rivers State, saying that the year would witness the continuation of the people’s emancipation from the satanic grip of the Peoples Democratic Party (PDP), which started with the November 26, 2013 defection of Governor Amaechi and other erstwhile PDP leaders in the state, who became members of the APC by virtue of the party’s merger with the defunct New PDP, of which Amaechi was a key leader.

“The rejuvenated APC under Governor Amaechi’s dynamic leadership has moved swiftly to take over all the local governments in the state. In the new year, we shall further step up the apc-nization of Rivers State so as to ensure that the evil party called PDP never again comes close to the corridors of power in the state, whether at the state or local government level,” Dr. Ikanya said.

He described the embracing of APC as the best thing that has ever happened to Rivers State politically, describing APC as a party that is out to liberate the people from PDP’s misrule and show what people-oriented governance is all about.

“My dear people of Rivers State rejoice, for the years of the locust are over for our dear state. Now that we have left PDP, where we were never wanted in the first place and where we were subjected to all manner of distractions, we can now concentrate on recovering lost grounds as an integral part of the APC family, which has the blueprint to fast-track the development of both our dear state and our country at large,” the Rivers State APC Interim State Chairman said.

Ikanya extended his best wishes for a Prosperous and Happy New Year to the Good People of Rivers State, urging them to continue to pray for and stand solidly behind the Amaechi Administration which, he assured, would never betray them as the PDP-led Federal Government has done.

OFFICE OF THE SENIOR SPECIAL AIDE ON MEDIA AND PUBLIC AFFAIRS TO THESTATE CHAIRMAN OF APC, RIVERS STATE CHAPTER