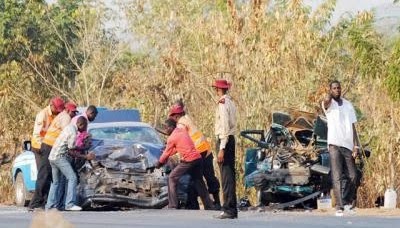 Leadership reports that the youth leader whose name was given as Uduafemhe Ibrahim Otaru, popularly known as “speaker worldwide” died on the spot on Sunday, February 7, while two other occupant in the car sustained serious injury.

A survivor of the accident, Napoleon Ediawe, said the Mazda saloon car somersaulted after the tire busted while the car was in motion.

According to him, the sad incident occurred while they were on their way to Agenebode to receive one Godwin Obaseki, an APC aspirant.

Ediawe who is presently hospitalised at a Catholic hospital in Agenebode frowned that Obaseki did not come to the hospital to visit them.

Meanwhile, the state chapter of the APC had been embroiled in internal crisis as Governor Adams Oshiomhole withhold his support to the governorship ambition of his deputy, Dr. Pius Odubu.

Recently, the former minority whip of the Federal House of Representatives,Samson Osagie, challenged Governor Oshiomhole, urging him to reconsider his hard stance against his deputy.

The party on Tuesday, January 26, in Benin, said the impeachment plot against the deputy governor will never materialise. It was reported that a section of the state house of assembly members plotted to remove Odubu as the state’s deputy governor.