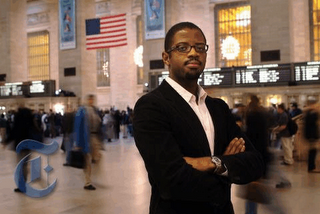 July 24, 2013
Apple has acquired Chinedu Echeruo’s HopStop.com, The Wall Street Journal’s publication, AllThingsDigital reports. Founded in 2005, HopStop.com makes mobile applications for both iOS and Android that covers over 300 cities and that helps people get directions or find nearby subway stations and bus stops. Terms of the deal have not been disclosed as at the time of this publication.

HopStop has often been compared to Israel’s Waze which was recently acquired by Google for $1 billion. The move is seen as Apple’s plan to bolster its map offering especially given Google’s recent acquisition of Waze.

A serial entrepreneur, Chinedu Echeruo grew up in Eastern Nigeria and attended Kings College, Lagos. He attended Syracuse University and the Harvard Business School in the United States and founded HopStop.com after working for several years in the Mergers & Acquisitions and Leveraged Finance groups of J.P Morgan Chase where he was involved in a broad range of M&A, Financing and Private Equity transactions. He also worked at AM Investment Partners, a $500 million volatility-driven convertible bond arbitrage hedge fund.

He founded and raised nearly $8 million for his two U.S based internet companies; Hopstop.com and Tripology.com. Tripology.com was acquired in 2010 by American travel and navigation information company, Rand McNally. He was named Black Enterprise Magazine’s Small Business Innovator of the year and listed in the magazine’s Top 40 under 40 and is currently a partner and head of the Principal Investing group at Constant Capital, a West Africa based investment bank.

“There is no reason why every entrepreneur should have to reinvent the wheel every single time in all the countries in Africa. My idea is to essentially to have one place where a budding entrepreneur can access a template for starting a business, and then customize it to suit their own situation. Essentially a business-in-a-box.”

GADGET REVIEW: Will iPhone 14 be a good buy after launch in September?