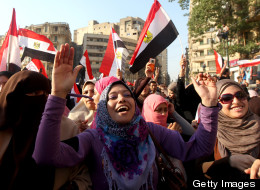 HuffingtonPost– As Islamist political parties have gained influence across the Middle East since the Arab uprisings, activists and pundits have questioned the role religion will play in new governments, including how religiously influenced law will affect women’s rights.

A Gallup report released Monday found that Arab women are as likely as Arab men to want Islam to play a role in their countries’ laws and that religious Arab men are more likely to support certain women’s rights than men who are less devout.

The report, “After the Arab Uprisings: Women on Rights, Religion, and Rebuilding,” draws upon polls of men and women in six countries that experienced political upheaval in recent years and asked questions about religiously influenced law, women’s rights, quality of life and the economy.

Those who were polled hailed from Egypt, Bahrain, Syria, Tunisia, Yemen, and Libya. More than three-dozen sets of interviewed were done with groups of about 1,000 people from early 2009 to late 2011. Those interviewed were spread equally between the different countries. The surveys took place before violence erupted in Syria this year. In Libya, they were based in eastern areas and did not include Tripoli.

Both men and women generally said their lives were worse now than before the Arab uprisings, yet respondents said they were optimistic that life would be better in five years. Only in Egypt did men and women say their lives were better now than under former president Hosni Mubarak. Speculation over the role of Islam in Egyptian government have increased since a Muslim Brotherhood candidate, Mohamed Morsi, was declared the winner of a presidential election on Sunday. The Gallup polls were conducted before his election.

“There is no link between men’s support for Sharia as the only source of legislation and antagonism toward equal rights for women,” Gallup researchers said in their analysis. “The more men support women’s participation in the workforce in a given country, the more women are likely to work in professional jobs. If the economy continues to suffer, women’s rights may as well. This suggests that economic trouble may be a greater threat to women’s rights than public support for religious legislation.”

A majority of women said there should be equal access to education and employment and equal legal rights. A smaller majority of men agreed. Regarding divorce, religious Arabs were more likely to support women’s right to ask for divorce than Arabs who said religion was not important to them.