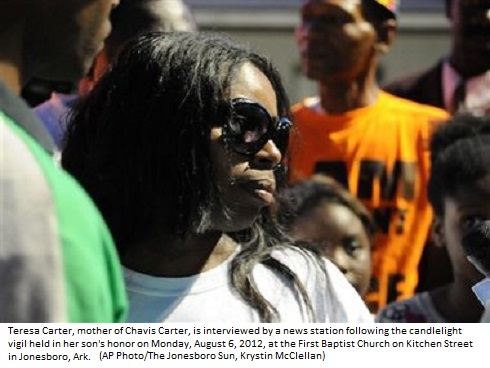 JONESBORO, Arkansas — Police in Arkansas are investigating whether a man fatally shot himself in the head as he sat in the backseat of a patrol car with his hands cuffed behind his back.

Chavis Carter, 21, died after Jonesboro police stopped a truck in which he was riding July 28 and learned he had an outstanding arrest warrant related to a drug charge. Carter was searched twice, handcuffed and put into the back of the patrol car, according to a police report.

Officers a short time later saw Carter slumped over in the backseat and covered in blood, according to the report, which concluded he had managed to conceal a handgun with which he shot himself. He later died at a hospital, and the report listed his death as a suicide.

Jonesboro Police Chief Michael Yates said Tuesday it appeared Carter shot himself in the head, but his department is investigating the incident, which the chief described as “very unusual.”

“Specifically, how Carter suffered his apparently self-inflicted gunshot wound remains unexplained and investigation … continues given the unusual nature of this event,” the department said in a statement.

Yates said the department is working to reconstruct what happened, but is waiting on an autopsy report that could come as soon as this week.

Examiner: According to CNN, Ms. Carter, victim’s mother, said her son was left handed. Additionally mother expressed, Chavis had spoken to his girlfriend prior to his arrest and did not seem suicidal.

Police cars had cameras but were positioned back to back where cameras were not in the position to for pictures. The body was taken from a police car to the hospital therefore, the crime scene was altered.

Chavis Carter was arrest on a $10 bag or marijuana. FBI is looking into the matter. The FBI will determine if the victim’s shot was suicide or homicide. The FBI website reports, among the single bias hate-crime incidents, 70.0 percent were victims of offender’s anti-black bias, which is more than any other ethnic group. For more information visit http://www.fbi.gov/about-us/cjis/ucr/hate-crime/2010/narratives/hate-cri…

Hundreds of people gathered in Jonesboro, about 130 miles northeast of Little Rock, on Monday for a candlelight vigil for Carter, and some questioned the circumstances surrounding the shooting. Some held signs asking “What really happened?” to Carter.

“Everyone wants justice,” Jonesboro resident Gale Taylor told The Jonesboro Sun after the vigil. “The circumstances are unusual, but everyone wants the truth.”

The NAACP also called for a thorough investigation into the death of Carter, who was black. The two other men who were in the truck with him and the two officers on the scene are white, according to police.

“The public relies upon police to serve and protect all citizens, no matter their race or ethnicity,” the state conference and Craighead County branch of the NAACP said in a statement.

The traffic stop came after police received a report of a suspicious vehicle driving up and down a residential Jonesboro street. An officer pulled up to the truck Carter was in and another officer soon joined him. The three men in the truck were frisked or patted down, according to the police report. Police said in a statement that the pat downs were “not necessarily” full searches.

One of the officers found marijuana in Carter’s pocket and then learned, after he initially gave a different name, that he had an active warrant out of Mississippi. Yates said Tuesday that the officers initially had trouble interpreting what the warrant was for.

“Since then I believe that it has been determined that it was for basically skipping out on probation on a drug charge,” the chief said.

Officer Keith Baggett found scales and smelled marijuana as he searched the truck’s passenger seat where Carter was sitting, according to the police report.

All three men were handcuffed, but the two others were later let go after they said they didn’t know anything about the scales or any drugs, according to the police report.

Officer Ron Marsh searched Carter again and put him in the patrol car, the police report said. As the officers prepared to leave the scene, Marsh noticed the smell of something burning and saw Carter slumped over.

Marsh ran to get Baggett, who wrote in the police report that he saw “a large amount of blood on the front of his shirt, pants, seat and floor. His hands were still cuffed behind his back.”

Baggett said in the report that Carter still was breathing, so he called for an ambulance. Marsh, meanwhile, tried to remove Carter’s handcuffs, but couldn’t because of the way his body was positioned, the report said.

Medics arrived and took Carter to the hospital, where he died.

Marsh found a handgun, which he secured and put on the trunk of his car, Baggett wrote in the police report. The report did not detail where the gun was found.

Police said witness statements and video and audio recordings show neither officer pulled his weapon nor fired a shot during the traffic stop, but Yates refused Tuesday to release those recordings, citing the ongoing investigation.

“We still may have some witnesses out there and if we release the dash cam video, the claim could always be made that somebody’s testimony was tainted by what they saw on TV,” Yates said.

Baggett and Marsh are on paid leave while the investigation continues. FBI spokeswoman Kimberly Brunell said the agency is monitoring the case.

Court records show a bench warrant was issued for Carter’s arrest in Mississippi’s DeSoto County in March after he failed to comply with the provisions of a plea. He had pleaded guilty to selling 30 grams of marijuana or less the year before, but the court required he meet conditions, including getting drug testing and not violating any state or federal laws for three years, before it was accepted.

Possible phone numbers listed for Carter’s mother, Teresa Carter, in Tunica, Miss., and Memphis, Tenn., were disconnected, and messages were left at other possible numbers.