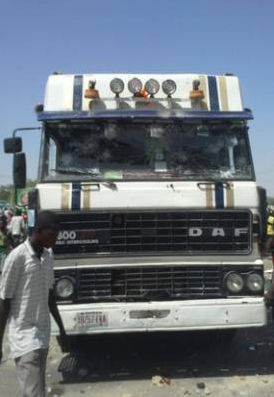 As five civilian joint task force CJTF youth were shot dead by soldiers of the Nigerian army in Maiduguri, Borno state capital Sunday, the CJTF have insisted that the army was behind a plot to bomb opposition candidate, General Muhammadu Buhari.

According to the CJTF, the convoy of explosives laden vehicles which was attempting to join the Muhammadu Buhari convoy but was quickly inyercepted by vigilant youth who observed that the suspicious trucks and car were not in the convoy that took the candidate from the airport.

Uniformed officers were in some of the vehicles and shot at and killed five civilians before largers numbers surrounded the vehicles and burned one while ensuring they blocked them from proceeding.

Meanwhile the Nigerian army according to the Punch newspaper claimed it had chartered these private vehiclez “because it had problems with its vehicles” It is however impossible to verify this explanation. According to srandard protocol, dangerous military hard ware is never transported without proper military convoy escort and in military designated vehicles.

In July last year a vehicle had similarly raced to join the General Buhari convoy in Kaduna and upon approaching his vehicle at a crowded market, suddenly detonated explosives which left dozens dead and destroyed the three bomb-proof  vehicles ferrying the ex-president.

Nigeria’s military has recently been accused of being dangerously and desperately political, publicly promoting and defending the interests of the Goodluck Jonathan ruling party.

A Nigerian captain recently released an incriminating audio recoding which exposed an army General partaking in election rigging on purported orders from the Nigerian army chiefs.

The army chiefs also recently were involved in an open plot and systematic coup when they forced the postponement of the slated February general elections to avert an imminent defeat of the current ruling party president.