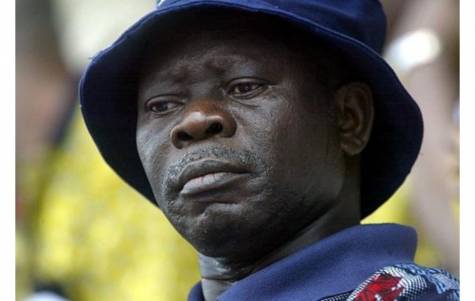 Edo North, where Governor Adams Oshiomhole hails from, was under 24-hour Army lockdown, Saturday, as all the entry and exit points into the senatorial district were sealed by soldiers till the early hours of Sunday.
Motorists and pedestrians who were caught unawares by the strange and unannounced military lockdown were stopped from moving and unlucky ones horsewhipped while others were made to face the indignity of being frog-jumped even late into the night of Saturday the 28th.

While the Inspector-General of Police had announced a restriction of movement from 8:00am to 5:00pm on election day, motorists trapped at a military checkpoint at Agbede, the gateway into Edo North bordering Ewu in Edo Central told reporters that the soldiers manning the checkpoint said they have orders to stop movement in and out of Edo North till midnight.

On his part, Governor Adams Oshiomhole said the army has been a huge problem as they had been used to rig for the ruling party at the centre.
There were no fewer than twenty military checkpoints in Edo North, there were five checkpoints at Okpella bordering Kogi State, two checkpoints at Iyamho, which completely sealed off the Governor’s home, five points at Auchi; another point at INEC office in Auchi, a checkpoint at Jattu junction, another one close to the Jattu home of Hon Philips Shaibu, the APC House of Reps candidate, another point at Ikabigbo, Ogbonna, Fugar, and three points at Agenebode.

There were also military checkpoints at Aviele and another one at Agbede, bordering Edo North and Edo Central.

INEC officials were not spared a harrowing ordeal in the hands of the soldiers as those taking materials to Ward 10, Unit 1 Iyamho were around 9:00 am, Saturday, as they were stopped by soldiers who had laid siege to the home town of Governor Adams Oshiomhole. The INEC officials told reporters that were forced to sit on the ground, alongside their police escort for several hours.

They were later allowed to leave after they got calls from their superiors. The soldiers said they were acting on strict orders from above.

Even journalists were not spared the soldiers’ ordeal as the INEC accreditation cards and reflective jackets were ignored while each reporter was asked to produce his company ID cards.

Curiously, newsmen who were returning to base to file their reports, Saturday night, and were cleared to proceed after producing their ID cards saw only light military checkpoint at Ekpoma in Edo Central and none in Edo South.
There were sporadic shootings by the soldiers at Okpella, during the day and at night while PDP chieftains in Wards 6 and 8 at Okpella disrupted the electoral process with the aid of soldiers to pave the way for electoral malptactice.

Interestingly, the uniform worn by the soldiers at all the checkpoints had no name tags.

Governor Adams Oshiomhole who spoke to reporters after casting his vote at 5:58pm at Unit 1, Ward 10, Iyamho said the military compromised and were in many cases used to chase away voters.

He said: “there are disturbing stories in many places. The Army has been used in a very criminal way to harass, intimidate and beat up voters in many units. For example at Fugar, our officers there were beaten up. They were going to take them away and the people were able to resist them. They went to another unit within the same Fugar, beat up people there, arrested the Local Government Chairman and took him away to the barracks on the order of General Odidi.

“In Auchi, everything was going well. They started counting and it was clear that APC was winning the Presidency, Senate and the House of Reps. To my surprise, the man that I respect so much, High Chief Raymond Dokpesi who I regard as a brother brought troops to Auchi, attacked women, beat up elderly people, attacked the electorate and disrupted elections at Auchi once they saw that the result being announced so far favored APC and favored Buhari.
“Dokpesi brought Army from nowhere. I don’t know when Dokpesi became commander in chief of the Army to have such rights. You have seen me, I am the Governor of this state and with all humility I am the number one citizen of the state but I am abiding by the rules which say that there is restriction of movement, that is why I am here at my polling unit. I have vehicles, I have bodyguards, I have even ordinary people who I can carry along to anywhere but as a leader I have to show example.

“Even when they delayed the supply of materials to 2pm, our people waited. Now I don’t understand how Dokpesi has suddenly become an extremist using Soldiers to hit at women, using soldiers to hit at elderly people, using soldiers to drive away electorate so that they can write result sheets. I am ashamed of him and I think it is a sad day for Nigeria because for people like that, I think they have the greatest stake in democracy. I don’t know what his contract is that he had to go this far to do this very dirty job but I do not think it will change what God has willed.

“In Igueben, I have just been told that once they again saw that they were losing, Tom Ikimi invited the Army and the Army responded and they were beating up women, beating up the elderly. I emphasise women because as you can see from here, they just sat down, they are patient, they want to exercise their right. The men might be tired and leave but they will stay there. The good thing is that the voters are not fighting. In all cases, I have not heard where I am told the police are harassing people, it is the Army that is beating people, it is the Army that Dokpesi is using.

“As the Governor of Edo State, I have chosen to be here. It is the sensible thing to do, to obey the law. Yes, Igbinedion’s daughter may be contesting but that does not give him the right to move around. Even the candidate is not at liberty to move about freely. Now Igbinedion is moving around using policemen to harass and intimidate the electorate and surprisingly, each officer you call will say, oh I didn’t know. The policemen attached to him, are they from Esama’s republic?

“I think it is two conclusions I have reached. First which is very reassuring is that the Nigerian people have bought democracy, they have internalized the values of democracy. The ordinary man and woman wants democracy. However, the level of desperation on the part of PDP that they must return the ruling party to power in my view is extremely worrisome because if we wanted just continuity, we didn’t have to worry about military rule.

“Now people want to vote, they have a right to vote. It’s clear that some INEC officers too have been compromised. As you can see, the lady who is supposed to manage the election in this local government disappeared, the guy who is supposed to fix the card reader was nowhere to be found and as you can see, they would have stopped accreditation if I were not here. Across the state, there are stories like that and it is very shameful.

“In all cases, the turnout of the electorate is very good, people are enthusiastic. The ordinary people are not fighting, those causing trouble are men of the Nigerian Army who are beating up people and scattering ballot papers accompanied by chieftains of the PDP.

“INEC Officials in Orhiomwon completely compromised. No result sheets in any polling unit in Orhiomwon and the Electoral Officer have very silly stories to tell. Up to 11pm, 12 noon, election materials did not get to most parts of Orhiomwon and I had to complain to INEC authorities and they confirmed it. When they eventually brought the election materials, there were no result sheets and you know what that means is that you can be doing whatever you are doing, the person with the result sheet will sit somewhere and just write the result. So whatever you think you were going to achieve with the card reader or no card reader, they will simply write the result.

“I have been informed that Orhionwon has been cancelled because of these malpractices and maybe some areas where there were no result sheets we cannot certainly accept results from those areas. It’s a mixed reaction and it is quite shameful. As a Nigerian I thought that this time around we would say yes, we got it right but it doesn’t seem so. The Army has been a huge problem in this process, but the cheering news is that Buhari will still win.”