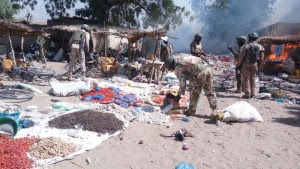 The troops discovered Boko Haram terrorists camp, patent medicine outfit and major market at Gulumba. Quite a number of Boko Haram terrorists were killed and several items were recovered. This includes 2 logistic trucks, 180 motorcycles, 750 bicycles and various perishable and non-perishable items such as a 100 KVA Mikano generator and grinding machine.

In addition, they also rescued 195 persons held hostage, recovered 300 cows, 200 sheep and 130 goats rustled by the insurgents. The troops also recovered military items such as camouflage uniforms as well as rifle magazines and grenades.

The unprecedented feat was achieved through the renewed cooperation and support of the public who provide timely information to the troops.

Consequently, we would like to thank all those good citizens who provide the timely information and enjoin all to see the fight against Boko Haram terrorists as a collective responsibility to enable us clear the remnants of the insurgents in the north east and other parts of the country.