Barely a week after incoming President Muhammadu Buhari had told Borno delegations who paid him a congratulatory visit last Sunday at his Kaduna residence that he will restore peace to the region by according top priority in ending the 6-year Boko Haram insurgency in the northeast in addition to resuming the search for oil along the Lake Chad Basin, over 2,000 Boko Haram fighters reportedly took over Marte, an oil-rich border town between Nigeria and Cameroon in northern part of Borno State on Thursday, sources said yesterday.

Sitting on the western coast of Lake Chad, this is the third time insurgents will take over Marte. They first took it over in 2012 but were chased out by Nigerian troops shortly after the declaration of state of emergency in 2013.

The terrorists also took over the town in 2014 during their territorial conquest of various towns and villages but were again forced out before the recent elections.

Security sources and residents of Kirenowa, the major town in Marte, said the insurgents invaded the town from various locations and succeeded in dislodging Nigerian troops stationed in the area.

Abba Yusuf, a resident of Kirenowa told reporters in Maiduguri that the insurgents killed unspecified number of people and destroyed some structures.

“They really wreaked havoc in Kirenowa and environs this time around when peace was returning and our people have started coming back. They killed unsuspecting residents and destroyed many buildings like the local government secretariat,” Yusuf said.

“The fighting continued till early today (Friday) when the soldiers retreated. The town has fallen and insurgents are fully in charge, they are more than 2000 in number,” Ibrahim said. 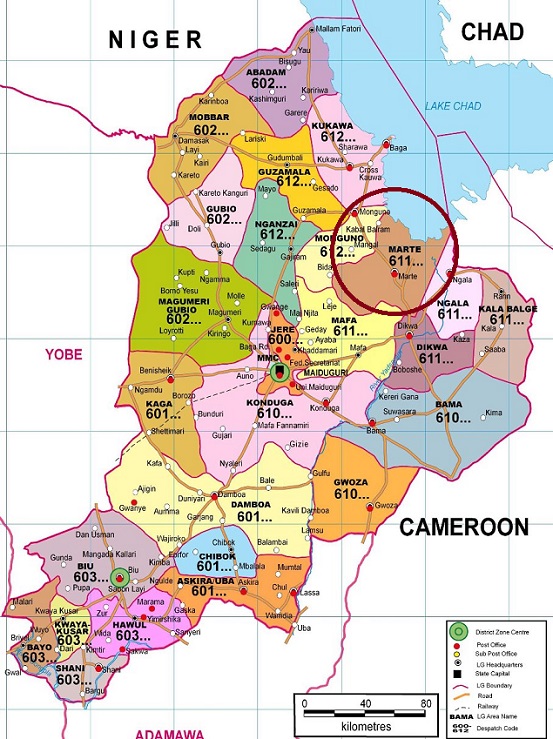 He added that some of the insurgents have advanced towards Monguno, a garrison town which once fell to the Boko Haram fighters but was recovered by Nigerian troops.

A security source who asked not to be named confirmed that large number of Boko Haram fighters thronged Marte.

The multi-million dollar question now is, is the Boko Haram war truly about the oil in the Lake Chad as being opined by some analysts? If not, why are the insurgents, said to be in large number, suddenly regrouped and embarked on territorial conquest barely few days after the President-electhas promised the people of the Northeast that he will rebuild their economy by resuming oil exploration at the Lake Chad?

Marte sits on the western coast of the Lake Chad, which is believed to have oil in commercial quantity. Who are those that are bent on seeing that exploration of oil at the Lake Chad area remains a NO-GO-ISSUE?

Who are those that have mortgaged the future of people of the Northeast because of the interest of oil at the Lake Chad?

KSM News will continue to monitor the development as it unfolds, while we would at this juncture PRESS THE RED BUTTON, calling on our thousands of gallant Civilian JTF to be on the alert. Your opinion,