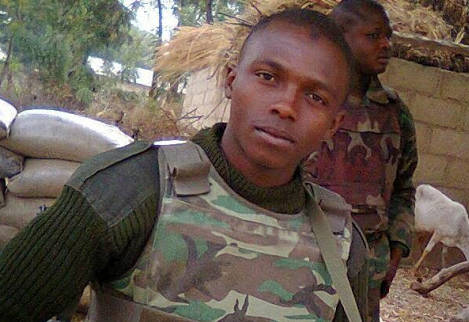 One of the 54 soldiers sentenced to death by a Nigerian Army court martial for mutiny and conspiracy to commit mutiny has taken to the social media to express his frustration.

The soldier, who bears the name Fahat Fahat, posted on his Facebook page on Friday that all the soldiers asked for were better weapons.

“Hello ladies and gentlemen. I am soldier and I am sentence to death by the Nigeria army (sic) (be)cause we did not go to fight Boko Haram without equipment. We ask for weapon instead dem gave death sentence (sic),” he posted in a chilling message that gives a firsthand insight into the likely state of mind of the soldiers.

Fahat’s wall showed different pictures and posts of an excited soldier. In one post, he said, “I am a commando trooper, Jumper Canta Force Galopa Amphibios (sic). Above I am a gorilla, the king of the jungle. I am trained to kill the wicked. I am proud to be a killer. We do good things to good people and bad things to bad people. One man one bullet, sometimes, one man, one magazine.”

But the tone of his messages seemed to change from October 2014.

In a cryptic message on November 24, 2014, Fahat posted in caps, “I am sick and tayerd with dis forking alpha romeo mike yankee seriousely (sic)” Meaning: I am sick and tired of this f****** Army seriously.

Another soldier, Fredrick Ayonronmi, who is Fahat’s friend but not one of the convicted soldiers, also took to Facebook to express happiness after an operation.

“Lord, thank you for my life, because I am a survivor of Boko Haram attack in Vimtim Forest. After five days in the bush, Lord I praise you,” his post read.