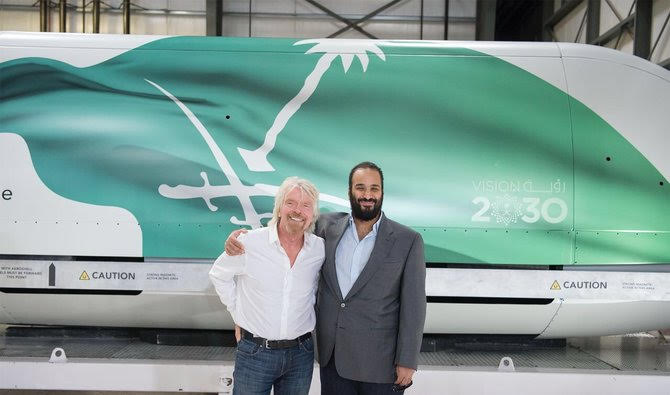 Saudi Crown Prince Mohammed bin Salman’s investment of $1 billion and option to pump a further $480 million into Richard Branson’s ventures in space, confirmed during the prince’s recent visit to the United States, was more than just another headline-grabbing move.

By focusing on space sciences, long a field rejected by ultra-conservative Islamic scholars, some of whom insist that the earth is flat, Prince Mohammed was setting the outer limits of his top-down redefinition of Saudi Arabia’s austere interpretation of Islam.

In doing so, Prince Mohammed was seeking to end the dampening effect Islamic scholars have had on the kingdom’s technological and scientific development for both civilian and military purposes.

As recently as 2014, a Saudi astronomer complained that the kingdom’s “general culture,” a reference to religious ultra-conservatism, had resulted in a “lack” of teaching and study of astronomy.

Islamic scholars rejected astronomy as contradicting religious precepts as well as a form of astrology despite the fact that space research could help them calculate prayer times and the dates of religious holidays.

“The Salafis  as you know, have no mercy,” Saudi physicist Haisham Abad told Jorg Matthias Determann, author of ‘Space Science and the Arab World, Astronauts, Observatories and Nationalism in the Middle East,” a recently published history of Arab exploration of space.

Mr Abad described how he felt he had to publish his efforts to reform the Islamic lunar calendar on a lunisolar basis outside of the kingdom even though he had garnered support from some within the religious establishment.

Similarly, when he wanted to give a public lecture at the King Faisal Center for Research and Islamic Studies, which is chaired by Prince Turk al Faisal, a former head of Saudi intelligence and ambassador to Britain and the United States, who at times publicly articulates views that Prince Mohammed shares but prefers not to air, Mr. Abad was rejected because his research was “outside the Salafi line.”

Space science threatened the long-standing religious status of scholars who each year determine the beginning of the holy month of Ramadan by sighting the moon. The Jeddah Astronomical Society opted in 2012 to halt its statements on moon sighting after the Abu Dhabi-based Islamic Crescents’ Observation Project (ICOP) declared that astronomical calculations indicated that a sighting of the moon in countries like Saudi Arabia Iraq and Syria was not possible.

“People who see the new moon with the naked eye, are the same people who have been seeing it for the past 20 years or so. With all this technology, astronomers and experts, we have special telescopes directed to the moon and then traditional moon sighting people say they saw the moon. I believe it’s time to trust science,” said ICOP president Mohammed Odeh in justification of the group’s conclusion.

Religious opposition to endeavours of scientists like Mr. Abad and groups such as the ICOP and the Jeddah society as well as past international sanctions against some countries like Iraq had stymied or prevented the development of space research but was unable to force a complete shutdown.

Government-sponsored scientists and institutions as well as independent scholars remained looped into the science through activities under the auspices of the United Nations, collaboration with European research facilities or because of their involvement in US research program, including an association with American universities in Beirut and Cairo.

Astronomy remained, however, a touch-and-go proposition. Authorities in Algeria, for example, were forced to back down from taking a compulsory astronomy course designed to enable religious scholars to apply the science to Islamic jurisprudence to the next level when they had to cancel plans to establish an institute of astronomical sciences and a planetarium.

As a result, students made their way to universities in the west while scientists migrated to the Gulf. “Astronomy, like the rest of Algerian science culture, and education, is in total disarray,” Mr. Determann quoted Nidhal Guessoum, a scientist who returned to Algeria after completing his doctorate at the University of California and working for NASA.

In a separate interview, Mr. Guessoum asked whether “Muslims (were) still in the dark ages.” He warned that without “a review of the education given to Muslim youth today…the future will be very dark.”

Writing in Gulf News last year, Mr. Guessoum noted that professors at the sciences faculty of the University of Sfax in Tunisia had allowed a PhD student to submit a thesis declaring the earth to be flat, unmoving, young at only 13,500 years old, and the centre of the universe.

Mr. Guessoum said the PhD was the result of an “adherence to religious, scriptural literalism, in other words taking the meanings of religious texts literally and blindly, at the cost of rejecting all knowledge that appears to contradict it, no matter how much evidence supports it.”

He warned that “we are not only failing to educate the public (that is manifest in the trendy ‘flat earth’ and ‘Nasa lies’ memes on social media) but also our brightest students.”

Saudi Sheikh Bandar al-Khaibari told students at a UAE university two years earlier that the earth was stationary and did not orbit the sun.

“Focus with me, this is Earth;” Mr. Al-Khaibari said, holding a cup. “If you say that it rotates, if we leave Sharjah airport on an international flight to China, the earth is rotating, right? So if the plane stops still on air, wouldn’t China be coming towards it? True or not?”

Waving the cup in a circle, Mr. Al-Khaibari argued that “if the earth rotates in the other direction, the plane will not be able to get to China because China is also rotating.”

Libyan leader Moammar Qaddafi, a self-styled essayist and short story writer, shared religious leaders’ opposition to astronomy. In one story, entitled Suicide of the Astronaut, Mr. Qaddafi described a man who found nothing of interest when he visited the moon. On his return to earth, the man discovered that his qualifications as an explorer made finding a job impossible. In the end, he commits suicide.

In a twist of history, it was Saudi Prince Sultan bin Salman’s voyage in 1985 into space as a payload specialist aboard the American STS-51-G Space Shuttle that constituted a first step in countering religious opposition to astronomy.

“It took the return of a Saudi prince for Ibn Baz to cease his assertions” that astronomy is un-Islamic because the sun moves and the earth is fixed, Mr. Determann reported. He was referring to Abdulaziz ibn Baz, the then head of the Islamic University of Medina and grand mufti of Saudi Arabiawhose assertions were taken to mean that the earth is flat.

The fascination with the first Arab and Muslim space explorer may have had a dampening effect on religious resistance but didn’t squash it. Neither did a controversial effort by Saudi universities that started at the turn into the 21st century to kickstart the study of astronomy and boost their international rankings by enlisting prominent western astrophysicists who were offered lucrative packages.

The experience of Mr. Abad and his colleagues fit a pattern. Efforts at the beginning of the 21st century by Saudi scientists, who pointed not only to civilian and economic implications of space studies, including satellite technology that had been embraced by Saudi Arabia and other Arab states, but also its national security and military applications, long failed to get the hearing they deserved.

That all is changing with the rise of Prince Mohammed in 2015. There is little doubt that his quest for Saudi advances in space studies as part of his effort to take the kingdom into the 21st century was also driven by Iranian space efforts and inspired by the United Arab Emirates determination to make the development of a space industry “a primary national objective.”

By pumping money into Mr. Branson’s trio of space-focused companies, Prince Mohammed was joining the UAE which already has a stake in Virgin. “The future of Saudi Arabia is one of innovation…and it’s through partnerships with organisations like Virgin Group that we will make active contributions to those sectors and technologies that are driving progress on a global scale,” Prince Mohammed said.

Not someone to play second fiddle, Prince Mohammed’s investment potentially signals a Gulf race into space. The UAE announced that it intended to land a space craft on Mars by July 2021, the country’s 50th anniversary, and would build a $140 million Mars Science City that will cover 176,000 square metres of Emirati desert, making it the largest space simulation city ever built..

The UAE initiatives and Saudi efforts have prompted Kuwait to think about establishing a space agency of its own despite the high cost at a time of depressed oil revenues.

Saudi Arabia’s investment in Virgin follows an agreement with Russia concluded in 2015 to partner in efforts to build a second international space station by 2023.

“The Kingdom seeks through the space and aeronautical technology program to achieve a regional leadership in this vital sector relying on its preeminent position and vital capabilities that will allow the country to obtain its objective,” the King Abdullah University of Science and Technology said at the time the agreement with Russia was signed.

Chances are that Prince Mohammed will succeed in promoting space science. His success is, however, likely to depend on his ability to keep ultra-conservatives in the kingdom in check, groom a generation of more liberal Islamic scholars that enjoy popular credibility and deliver on his economic reforms. The jury on all of that is still out.