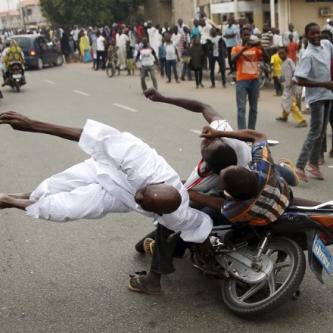 More deaths reported across Nigeria in celebration of the victory of General Muhammad Buhari as Nigeria’s next president.

This is an image of a motorcycle accident in Kaduna during the excessive celebrations. Stunts and accidents like this are part of what is leading to the deaths. People should celebrate responsibly.

Our Earlier Report: Many Die in Kano

Information available indicate that many people engaged in celebrating Buhari’s victory lost their lives in celebrating the victory of Buhari in kano.

The incidents occurred in different part of kano state,further findings indicates that many were taken to murtala muhd general hospital,others were taken to other various hospitals within kano state.

Many of the victims were either hit by a moving vehicles making stunt displays or lost their footing while watching the activities.