NewsRescue- The August riots in the United Kingdom which followed UK cops assassinating a black minority, Mark Duggan, who was shot dead in a cab in Tottenham, have been referred to by the UK Prime minister as the work of thugs and criminals. More than 2,200 people have been arrested countrywide. Many view the thousands of disgruntled youth breaking into stores and burning buildings as ‘looters’. This can not be further from the truth. The riots in England are simply ‘economic riots‘. The well defined target- Corporate Britain. It is no coincidence that one in 10 retail and leisure firms had been affected by the disturbances.

There are different types of riots, they could be political, in which case the people see the government as the main enemy and attack and burn establishment. This was the common type of riots in the Middle East, where the people blamed the governments for the hardships and inflation. Riots could also be economical, where the economic industry is targeted for being, more importantly than the government, the root cause of hardship and inflation. These were the riots of the UK this August. Dubbed by some as the Robin Hood riots, after a British 13th century folklore (Rabunhood), of a villain who lived in Sherwood forest, that used to rob the rich to feed the poor.

Excerpts from above “Robin Hood audio”, video of BBC correspondent, Leana Hosea’s interview of some young proletariat’s in the heat of the riot.

Leana Hosea: Misses!
So you are drinking bottle of…Rose wine, half-five in the morning

Leana Hosea: And you been drinking all night

Leana Hosea: So you reckon it’ll go on tonight?

Leana Hosea: But why is this targeting local people, your people?

The world is at a point where the gap between the rich and poor is at its highest in recent times. Corporate business runs and owns governments, Wall street owns the US government and Canary Wharf owns the UK government. The young masses know this, they see this as the enemy. Frustrated youth are no longer complacent. This was not looting. This was a riot against Corporate Britain. Descriptions of the ”looters” by the government and prime minister, David Cameron as “sick people”, ordinary “thugs”, and “criminals”,  with “poor parenting”, were extremely insulting and with intention to distort the truth.

The pre-planned housing market crash and recession was developed to further expand the wealth gap. The survey below shows the impact of the recession on the gap between blacks and whites in the United States. In 2004, whites were 10 times wealthier than blacks. By 2007-2009, courtesy of the housing collapse, homes being the popular only asset of minorities, the gap had expanded with whites being 20 times wealthier than black minorities.

Mr Darcus Howe, a 50 Year UK resident speaks about the “Insurrection” on BBC

Families of rioters to be evicted

It is inevitable that the western world will continue to see more economic riots as have occurred from Greece to the UK. Rather than address the root of the crises, Prime minister David Cameron revoltingly said: “Let’s make sure if people riot and break the law they get thrown out of their council house.”

According to the Mirror, Wandsworth announced on Friday that the first eviction notice had been served – to the mother of an 18-year-old boy accused of violent disorder and attempted theft. The teenager had not yet been convicted.

Chris Goulden, programme manager at the Joseph Rowntree Foundation charity, condemned the actions. “There’s a real danger here. The courts are there to punish wrongdoing through the justice system. It’s not fair for a family to suffer because of the action of one individual. It means families who happen to be living in that kind of accommodation are punished twice, double what anyone else in society would be.” –Guardian

The family of a 12-year-old boy photographed stealing a bottle of wine during riots in Manchester are now facing the possibility of eviction from their council house. –Telegraph

Prime Minister David Cameron has criticized police for being too timid in their attempts to gain control of the rioting and looting. Sir Hugh Orde, head of the Association of Chief Police Officers, lashed out Cameron’s decision to hire Bratton, questioning his expertise.

“I am not sure I want to learn about gangs from an area of America that has 400 of them,” Orde said of Los Angeles.

“It seems to me, if you’ve got 400 gangs, then you’re not being very effective. If you look at the style of policing in the states, and their levels of violence, they are fundamentally different from here.”- Edmonton.CTV

Related: NewsRescue- The London Riots and How They Will be Used to the Elite’s Advantage

William Richard Baker of 4Freedom.ning in his article, “Pay back is a B*tch”, said:

Lets get NATO to bomb them rioters,(insurgents), (Resistance fighters), (Rebels), if they say they are forming a government will they be recognised by Cameron? And then armed secretly to kill normal citizens? Is there any difference between what the insurgents did in Libya burning, looting and killing that was recognised as a government by the UK than these rioters now in the UK. Double standards seem to come back and bite you on the arse Mr Cameron. 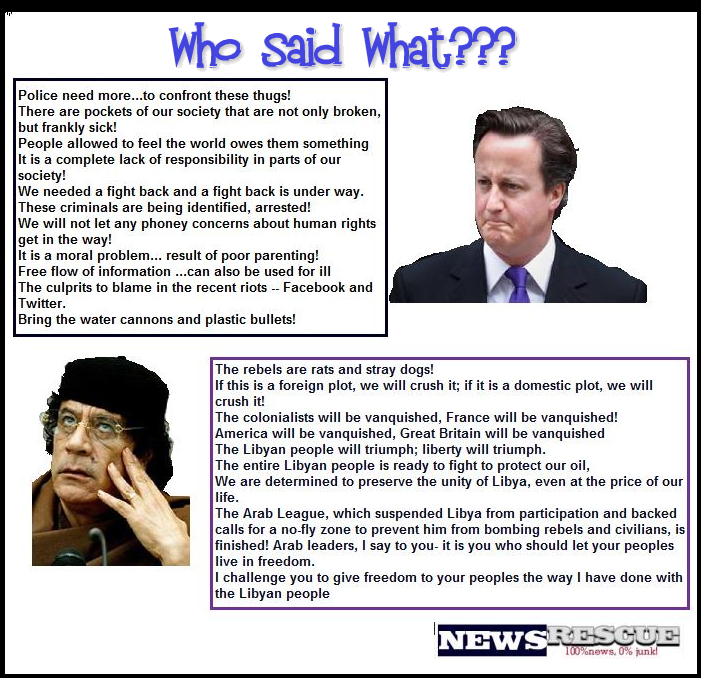 Iranian president Mahmoud Ahmadinejad criticised the UN security council for remaining silent over the riots in Britain.
[ad#medium]
Having already offered to send an expert team to investigate human rights abuses amid the riots, the Iranian regime has gone one step further and called on the UN security council to intervene over the British government’s handling of the unrest rocking the country.

Speaking to reporters after a cabinet meeting on Wednesday, Iran’s president, Mahmoud Ahmadinejad, condemned the British government for its “violent suppression” of the protesters and called for an end to what he described as the “killing and brutal beating” of “the opposition” angry with the government’s financial policies.

“The real opposition are the people who are beaten up and killed on the streets of London, those whose voices are not heard by anyone,” Iran’s Irna state news agency quoted Ahmadinejad as saying.

The foreign ministry, went so far as to issue a statement advising against any unnecessary travel to the UK.

On Tuesday night, conservative websites sympathetic to the Islamic regime called on the Iranian government to offer refuge in its embassy in London to “UK protesters in need of protection”.

Ahmadinejad criticised the UN security council for remaining silent over the riots in Britain. “What else should happen for the security council to react and condemn one of its own members?”

He accused the UK authorities of portraying its opposition as a group of “looters, rioters and drug dealers”, adding: “Does Britain have this extent of drug dealers? If this is the case, they should be tried and UN should build walls surrounding their country.”

Ahmadinejad said the protests were the result of London’s imperialist policies of the past three centuries and of ignoring the poor. “Time is up for few capitalist families with different titles to loot other nations and governments and making them slaves,” he said.

“Instead of giving up their wealth to control their deficit, the burden has been put on masses. There are pressures in crisis and it’s evident that people would protest in such a situation,” he said. source