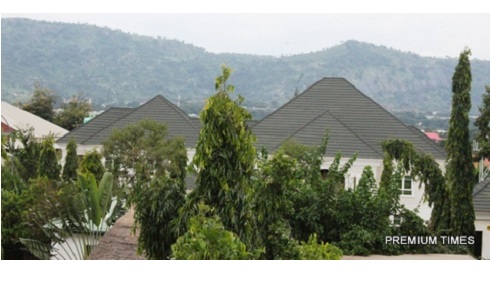 Based on his annual salary as National Security Adviser, Mr Azazi would have to serve for 274 years to earn N1.5 billion, the value of one his new Abuja homes.

The two exotic homes sit side by side on 19 and 21 Mambila Crescent in Aso Drive, a choice part of the nation’s capital where some of Nigeria’s men of power and means live.

Both mansion-like properties, were bought at the tail of Mr Azazi’s service at the presidency.

Property experts, who we requested to value the houses, estimate that each of the properties are worth at least N1.5 billion.

A third property, recently acquired, is yet undeveloped. It sits behind the two mansions on Mambila Crescent, sharing a fence with their swimming pools but accessible through Olumo Close, off Mambila Crescent.

The home on No. 21 is the retired general’s favourite. It is tastefully finished, shielded by high voltage security fencing fitted with sophisticated security cameras on all sides.

It is a duplex, fitted with a Barbados-shaped swimming pool at the backyard and boys quarters.

The property on 19 is a little less busy, seldom used by the retired general and his aides. It is tastefully finished too, like the general’s favourite but not guarded as much.

It is also a duplex, fitted with a Bahama-styled rectangular swimming pool at the back side, adjacent to the boys quarters.

The undeveloped adjoining property, on No.2 Olumo close, off Mambila Crescent, was acquired at N800 million, sources familiar with the deal told PREMIUM TIMES.

The new plot is currently being developed by First Fingers Construction Limited. The site is concealed from public view, but the ongoing construction on the plot was still at its foundation stage, early August.

Before moving to the Aso Drive estate, the retired general occupied two semi-detached duplexes at 30 Mamman Nasir street in Asokoro.

The Asokoro mansion has no swimming pool and now looks deserted. Neighbours told us Mr. Azazi “no longer comes around.”

Mr Azazi’s highest earning was as a military general, where he earned N1.4 million monthly, N16.8 million annually. He earned this perk between 2006 and 2007.

The retired General needed to serve as a military general for 94 years to earn as much to acquire one of his estates through known legitimate earnings.

Relying on his annual salary as the National Security Adviser, Mr Azazi would serve for 274 years to earn N1.5 billion, the value of one of his apartments.

Mr Azazi was appointed National Security Adviser just as the extremist Boko Haram sect was scaling up its deadly attacks on Nigeria.

At the time, militants in the restive Niger Delta region had just embraced amnesty and the country was battling to repair its oil-dependent economy, largely crippled by the militants.

While in office, General Azazi supervised the expenditure of not more than N304.552 billion of public funds allocated to the intelligence community to check the growing insecurity in the country.

During his tenure, he was severely criticised for presiding over the spending of several billions of naira on security while delivering little or nothing, especially with insecurity spiralling out of control.

Some critics even suggested that a huge chunk of the funds allocated for security went into private pockets of officials.

In his first year in office, Mr Azazi supervised what was left of the N75.047 billion allocated to the intelligence community after he took over from Kayode Are who acted briefly as NSA after Aliyu Gusau left.

In 2011, the security budget surged – just as the Boko Haram terrorist activities too – to N105.240 billion.  Mr Azazi supervised the spending of the funds.

In 2012, the intelligence community got even more money, a scandalous N124.263 billion – just as internal insecurity grew worse.

In the 21 months Mr Azazi served as National Security Adviser, the security budget almost doubled and he supervised the utilization of not less than half the total sum budgeted for the community in those years, 2010-12.

While the worth of Azazi’s favourite home is over 27,000 percent higher than his annual salary, it is a meagre fraction – 1.4 per cent – of the public funds he managed in 2011 alone.

When PREMIUM TIMES sought explanations from Mr. Azazi on how he acquired the exotic properties, the general flared up and asked our reporter to “go to sleep.”

“You call me on phone from PREMIUM TIMES to ask how I got money to buy a house?” he asked.

“Go to sleep!” he snapped and then dropped the call.

Later, Mr Azazi sent a text, saying, “Go look for facts my Premium man. I ran Weiboro Properties for over 2 years before I went back to government.”

Since he terminated the call before we could ask all our questions, we were unable to get his reaction to suggestions by some critics who believe that he left the NSA post far richer than when he got in.

Mr. Azazi is one of Nigeria’s most decorated soldiers. Between May 2006 and June 2007, he wore the ranks of Major General, Lieutenant General and General.

He became the Director of Military Intelligence in 2003, his first major command appointment. He was appointed the General Officer Commanding (GOC) 1 Division, Nigerian Army in January 2005, and subsequently served as Chief of Army Staff (COAS) between 2006 and 2007.

Former President Olusegun Obasanjo appointed him Chief of Defence Staff (CDS) in May 2007.

He however returned to public service in October 2010 when he was appointed the National Security Adviser by President Jonathan.

His stint in the corridors of power ended sadly in June 2012, when he was abruptly sacked by Mr. Jonathan.

In an audacious comment that irked President Jonathan and the ruling party, the retired general blamed the political infighting within the ruling People’s Democratic Party (PDP) for the growing internal insecurity in Nigeria.

That speech spinned him into extensive political discourse and triggered the beginning of his exit from office.