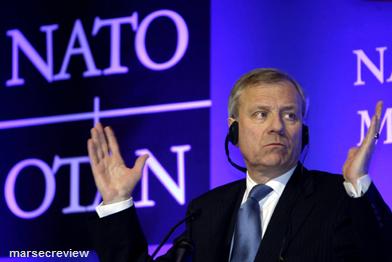 A recent article in Kenya’s Africa Review cited sources in the African Union (AU) disclosing that the 28-member North Atlantic Treaty Organization is preparing to sign a military partnership treaty with the 53-nation AU.

The author of the article, relaying comments from AU officials in Addis Ababa, Ethiopia where the AU has its headquarters, wrote that although “the stated aim is to counter global security threats and specifically threats against Africa, some observers read the pact as aiming to counter Chinese expansion in Africa.”

The feature further claimed that NATO is negotiating the opening of a liaison office at AU headquarters and that the North Atlantic Alliance’s legal department is working with its AU counterpart “to finalise the new pact, which will be signed soon.” [1]

The news story additionally divulged that Ramtane Lamamra, African Union Commissioner for Peace and Security, “confirmed that Nato is to sign a military cooperation agreement with the AU” with particular emphasis on consolidating the African Standby Force (ASF). The latter is intended to consist of brigades attached to the five Regional Economic Communities on the continent. (North, East, West, Central and Southern.) The West African Standby Force has been tasked the role of intervening in – which is to say invading and occupying – Ivory Coast since the announcement of presidential runoff election results in the country in December [2], and contributors to the East Africa Standby Brigade (EASBRIG), Uganda and Burundi, are engaged as combatants in the civil war in Somalia.

The AU’s Lamamra stated “Africa would like to learn from Nato on strategic airlift, advanced communications, rotation of important units among regions and to meet logistical challenges,” adding that “Nato was a good model on which to build the ASF.” [3]

NATO airlifted thousands of Ugandan troops into and out of the Somali capital of Mogadishu last March – 1,700 and 800, respectively – in support of the Ugandan-Burundian African Union Mission in Somalia (AMISOM). [4]

The Kenyan report also revealed that “Experts say Africa is becoming a strategic battleground between world powers and in particular the US, the European Union, China and Russia,” with the first two – collectively subsumed under NATO and its Partnership for Peace program (except, for the time being, Cyprus) – working in unison and the second two expanding oil and natural gas investments on the continent. In addition, Russia and China are competitors of the U.S. and its NATO allies in regards to arms sales to African nations. The piece added:

“According to knowledgeable sources, the new security arrangement could be a way to block the continent’s other main arms suppliers – China and Russia.

“If the pact gets endorsed by AU member states, it would be a big blow for China and Russia.”

On February 18 and 19 a delegation of high-level officials from the African Union led by Sivuyile Thandikhaya Bam, head of the Peace Support Operations Division of the AU, visited NATO Headquarters and the Supreme Headquarters Allied Powers Europe (SHAPE) in Belgium. As NATO reports:

“NATO and the African Union have developed an increasingly fruitful practical cooperation since 2005….NATO supported the AU Mission in Sudan [airlifting over 30,000 troops to and from the Darfur region] and is currently assisting the AU mission in Somalia in terms of air- and sea-lift, but also planning support.

The African Standby Force has been systematically modeled after the NATO Response Force, which was launched with large-scale war games in the African island nation of Cape Verde in 2006. The ASF is a joint project of NATO and U.S. Africa Command, which before achieving full operational capability on October 1, 2008 was conceived, developed and run by U.S. European Command, whose commander is simultaneously NATO Supreme Allied Commander Europe.

In 2007 the North Atlantic Council, NATO’s top civilian decision-making body, commissioned a study “on the assessment of the operational readiness of the African Standby Force (ASF) brigades.” [7]

The following year NATO Secretary General Jaap de Hoop Scheffer visited Ghana for three days and said “the military alliance could play an important role in training African soldiers,” in particular that “the Alliance had agreed to support the African Standby Force.” [8]

The same year Norwegian Colonel Brynjar Nymo – Norway’s embassy in Ethiopia is the informal liaison office for NATO’s relations with the AU – said that “cooperation between NATO and AU is currently focusing on technical support for the African Standby Force (ASF).”

The Norwegian embassy’s website at the time stated that “The Africa Monitoring & Support Team at the NATO Headquarters in Portugal is the operational headquarters for NATO’s work in Africa,” as indicated above. [10]

“In his capacity as NATO Deputy Assistant Secretary-General, Ambassador Jochems has frequently visited Addis Ababa for discussions with the African Union….NATO is providing technical advice, and making available subject matter experts, experiences from international operations, and access to relevant training facilities to the AUC [African Union Commission] in the context of the African Standby Force.” [11]

This January 26 and 27 NATO’s Military Committee held two days of meetings in Brussels with the chiefs of defense – the U.S.’s chairman of the Joint Chiefs of Staff Admiral Michael Mullen and his equivalents – and other military representatives of 66 nations, a third of the members of the United Nations.

The proceedings discussed ongoing NATO operations in Afghanistan – currently the world’s largest and longest war, with an estimated 140,000 troops from some 50 nations serving under the Alliance’s International Security Assistance Force – the Balkans (Kosovo Force), the entire Mediterranean Sea (Operation Active Endeavor), and the Horn of Africa, the Gulf of Aden and down the eastern coast of Africa (Operation Ocean Shield).

During the Military Committee and related meetings a session of the Mediterranean Dialogue was held with military leaders from the seven members of that NATO partnership: Israel, Egypt, Tunisia, Algeria, Jordan, Morocco and Mauritania. The session occurred as the government of Tunisia’s President Zine El Abidine Ben Ali had recently been toppled and the demonstrations in Egypt that would bring the same denouement to President Hosni Mubarak were getting underway.

On February 9 Serbia’s Beta News Agency reported Defense Minister Dragan Sutanovac announcing that a NATO strategic conference entitled After Lisbon: Implementation of Transformation will be held in his nation’s capital of Belgrade in June with representatives from 69 countries attending: All 28 NATO member states, 22 Partnership for Peace nations [12] in Europe, the Caucasus and Central Asia, and 19 other states. [13]

In addition to the Mediterranean Dialogue, NATO’s Istanbul Cooperation Initiative program is developing military cooperation with the Persian Gulf states of Bahrain, Kuwait, Qatar and the United Arab Emirates, with Oman and Saudi Arabia to be brought on board next. NATO Secretary General Anders Fogh Rasmussen was in Qatar from February 15-16 for the two-day Deepening the NATO-Istanbul Cooperation Initiative conference with the permanent representatives (ambassadors) of the bloc’s 28 members and senior military and government officials from the six Gulf Cooperation Council states: Bahrain, Kuwait, Oman, Qatar, Saudi Arabia and the United Arab Emirates. The first and last of them have troops serving under NATO in Afghanistan.

NATO also has a partnership category called Contact Countries. Subject to expansion, the four such nations are all in the Asia-Pacific region: Australia, Japan, New Zealand and South Korea. The U.S.-led military bloc also maintains the Afghanistan-Pakistan-International Security Assistance Force Tripartite Commission to coordinate war efforts on both sides of the Khyber Pass and has troops and other military personnel assigned to its command in Afghanistan from nations that are not currently among the 70 NATO member and official partnership states: Colombia, Malaysia, Mongolia, Singapore and Tonga.

The NATO-Russia Council was revived at the bloc’s Lisbon summit in November and NATO’s Kosovo Force (KFOR) is training and equipping the fledgling armed forces of Kosovo, the Kosovo Security Force. [14] NATO, then, has no fewer than 75 members and partners with nations like previously neutral Cyprus slated to follow. [15]

The African Union has 53 members and will soon have another after the successful independence referendum in Southern Sudan. The AU includes the Sahrawi Arab Democratic Republic (Western Sahara), conquered by Morocco in 1975 and not recognized by any NATO state, but not Morocco, which withdrew from the AU because of the latter’s recognition and incorporation of Western Sahara.

Four members of the AU, along with Morocco, are already part of a NATO partnership program, the Mediterranean Dialogue – Algeria, Egypt, Mauritania and Tunisia – so a NATO military cooperation treaty with the African Union could gain the Atlantic Alliance 50 new partners.

That is, the world’s only military bloc can further expand from one that grew from 16 to 28 members in a decade – 1999-2009 – into one that will become truly international in scope with nearly 100 military partners. Partners and members on every inhabited continent. Two-thirds of the nations in the world.

Japanese Military Joins U.S. And NATO In Horn Of Africa

AFRICOM Year Two: Seizing The Helm Of The Entire World