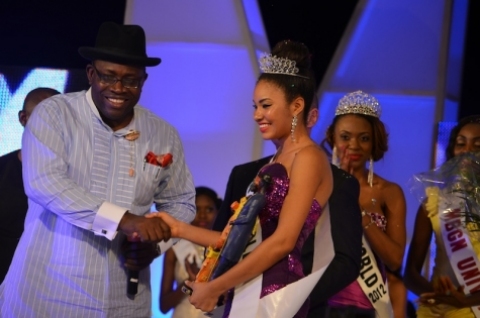 This is despite the governor saying recently said that the sponsorship of entertainment awards by the state government was not in the interest of the state’s oil-dependent and consumption economy. SaharaReporters has also gathered that the state currently has a pension liability of about N4 billion, which compelled pensioners to stage a public protest a fortnight ago.

The justification for the policy summersault to permit expending state resources to fund a beauty pageant in a state where basic social amenities are non-existent is unclear, especially coming from Dickson, who claims to run a prudent and transparent administration.

It would be recalled that earlier this year, the Bayelsa Government had to embark on a fundraising dinner to raise part of the sponsorship funds for the African Movie Academy Awards hosted by the state.

Observers of developments in Bayelsa said that beauty pageant sponsorship may be a form of patronage for Mr. Ben Murray-Bruce, the Chairman of the organizing Silverbird Group who contested the gubernatorial election with Dickson two years ago.

“The show was packaged to assuage the carnal lust of the political class and this is very sad development from a government that pledged to deviate from the culture of waste of public resources by previous governments,” an analyst said. “How can a state where there is endemic poverty and no public water supply and be wasting billions of Naira in sponsoring a beauty pageant where the elites will simply spend one night watching nudity and nakedness of young girls.

Asked Ephraim Johnson, a resident of Yenagoa, the state capital, “Is this the way he will develop the state? It is rather shocking that while the masses are struggling with refuse heaps and crying for basic infrastructure, the politicians are spending the commonwealth of the state on trivial things as beauty pageants.”

The beauty contest itself was marred by irregularities as the organizers, perhaps rewarding the government sponsorship, manipulated the results in favour of the Bayelsa contestant. Her performance in the interview segment before the live audience was abysmal and clearly inferior to that of the runner-up.

The development drew jeers from the crowd while fans of Miss Omo, who was declared runner up, left the hall in droves.

THE MOST BEAUTIFUL GIRL IN NIGERIA 2013 CONTESTANTS