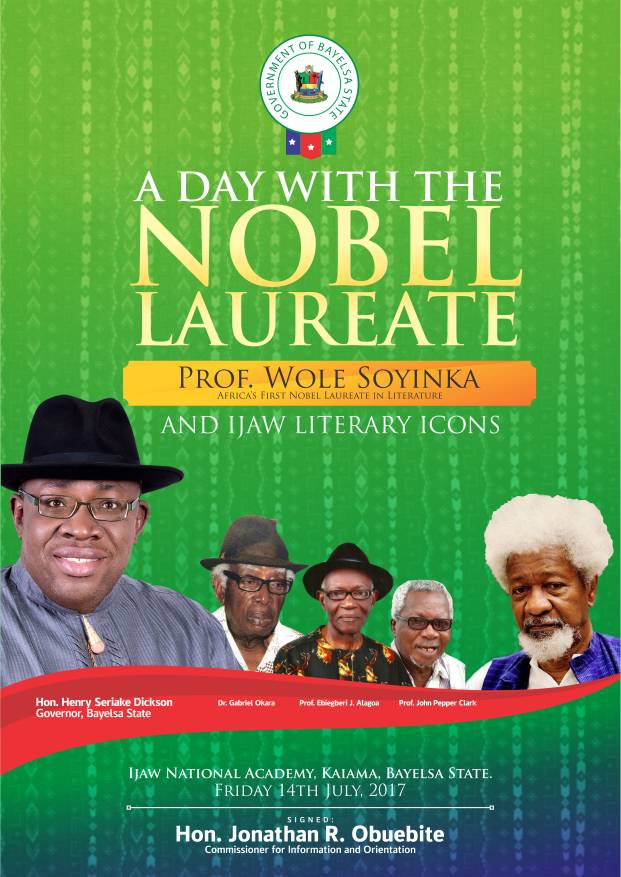 Bayelsa: Former Head of State, Gen. Yakubu Gowon has said that he created states many years ago to douse the fears of the country’s breakup and fears by the minority ethnic groups in the country who feared that the majority ones would dominate them.

General Gowon who was accompanied by his wife, Victoria, stated this in Yenagoa while commissioning the newly built Bayelsa State Government House, saying it is an iconic edifice.

Gowon who was given a traditional chieftaincy title, (Se Ebi Daubi) or ‘The Benevolent Father of the Nation’ by the Traditional Rulers’ Council of Bayelsa state was equally given a rousing welcome by Bayelsans who thronged the Government House for the colourful ceremony.

The ex-Head of state who lauded the Bayelsa state Governor, Seriake Dickson, on his developmental strides in the state also tasked other governors to ensure that projects left uncompleted by their predecessors are taken to completion.

He expressed immense delight at the developments which Governor Dickson has brought to Bayelsa saying, “from what I have heard, you did not abandon anything that your predecessors had done. But you built and improved on them and this is really to your credit. I am sure that there will be no abandoned project. He said, “ I was not expecting the kind of welcome I received here today. I have never been welcomed like this in all the traditional communities I have been to.”

Governor Dickson had highlighted the qualities of the former head of state describing him as the father of the nation. “I would like on behalf of the government and people of the state to welcome our leader and father, General Yakubu Gowon and when he landed, and we saw him, we all thought of our primary school days when all of us used to line up waving the green, white green and singing so many songs. “But in the end, we also remember the saying, “to keep Nigeria one is a task that must be done” and the other one said “go on with one Nigeria”. He is the father of Nigeria who led a team of very dedicated leaders. “We thank you for what you and your colleagues did to give us one Nigeria. Nigeria is not perfect. No nation is perfect. Nation-building is a work in progress”.

On the office complex, he said: “I want to enjoin all of you to pray that this office should be a place where governor’s after me and others will work in peace to lead our stage aright with the fear of God and always in service of our people. “When we took over, you are all aware that we have been working for the last five years to lay a solid foundation, building on what we saw in ground and introducing more and more things to ensure that our state gets to its desired destination. Today, we are here to commission a befitting office that will serve our state for a long time to come”.

Governor Dickson also said that, for the past five years, his development had been a more quiet evolution, not making noise. He therefore declared that, “This is the unveiling of the new Bayelsa to the world…We will make Bayelsa state a centre of investment, agriculture and other developments.” The Government House is built like a ship depicting a state sailing to greatness. Structurally, it is built with Cement and ornamented with glass. Explaining the significance, the Bayelsa state Commissioner for works said that the Cement stands for strong leadership while the glass means transparency in governance.

Some of the developmental strides of Governor Dickson in the state are the on-going construction of the Bayelsa International Airport with an already completed 3.4km runway, the longest in the country; the Restoration Flyover at Berger Junction to connect Azikoro Village, making them enjoy the dividends of democracy; and the building of a one-stop mega shop, the Transparency Building, to boost economic activities and create massive employment in the state. Others are the over 3000 seater Oxbow Lake with an aquatic view that gives one that natural touch and feel of recreation, the Bayelsa Diagnostic Centre with state of the art medical facilities to give professional care to especially mother and child, the aged and indeed, every Bayelsan at a government’s subsidised rates.

The Diagnostic centre is equipped with Latest X-Ray, mamography machines which are, perhaps, the only ones in the country for carrying out scans and body parts’ examinations even in a very microscopic nature. Moreover, after thanking the people of Bayelsa state led by Governor Dickson and the Traditional Rulers Council, General Gowon said, “I was delighted to create those states…years ago. At that time, the political situation was very difficult.” “ There was fears of the country breaking up, fears of domination of the minority…and the question was, what were we going to do in order to remove this fear causing problems in Nigeria…?” “Fears of being dominated by majority ethnic groups? The creation of states was to solve these fears…”

Gowon said he received massive supports from all the traditional leaders of the country and other big guns to create the states. Also, while commissioning the government house, Gowon said, “My joy knows no bounds. I am very much at home whenever I visit this state.” Urging all state governments to support the Federal government to make it succeed, Gowon also enjoined Governor Dickson saying, “Your Excellency, you have done exceptionally well. I have always known you for your love and commitment to Nigeria. I want to see you continue your love and commitment to Nigeria.” On those calling for breakup General Gowon, while harping on the country’s unity said urged especially the youths agitating for the country’s breakup to jettison the idea. He said while the youths have to listen to their elders, the leaders too have the responsibility of providing the educational enablement as well as give them a listening ears and carry the youths along towards national development. He said if the energy and exuberance of the youths are harnessed and combined with the wisdom of the elders, Nigeria will be better off.

Earlier, the former head of state was received by the Chairman of the Bayelsa Traditional Rulers Council, King of Twon Brass, King Alfred Diette-Spiff, who incidentally was the first military administrator of old Rivers State which was carved out of the then Eastern Region by his administration in 1967. ‎In his remarks at the commissioning of the new Governor’s Office, Ijaw National Leader, Chief Edwin Clark, said Nigeria’ns had always wanted true federalism where every Nigerian is equal whether from the minority or the majority groups. He said the country opted for federalism after the independence but tha the military interrupted it. “We all agreed that we wanted a federation. And that is what we have today but unfortunately, coups after coups changed the whole concept we back into having a unitary form of government in a uniform of federation. “So what do we do? It is never too late. Let us restructure this country so that everybody will have a belonging. Whether you are a majority or minority, we are all equal Nigeria.

“So when people talk of good rulers in this country, the humble son of Nigeria in the person of General Yakubu Gowon had again contributed more than any one else. He can go from place to place, he is not arrogant. “He is a humble man with good family background. Okay am happy today that my son, the executive governor of Bayelsa State has thought it wise to bring my former boss”. Lauding Governor Dickson, Chief Clarke said, “I know that this building will generate good governance. I know this building will bring peace and stability in the country. There is no second class citizen in this country. There is no first class citizen in this country. We are all equal”, he said. Also speaking, King Diette-Spiff described Gowon as the benevolent father of the nation adding that the former head of state was the architect of state creation. He said the people of the state would mark the inauguration of the project and the presence of the Gowon as the part of the achievements of the state governor.