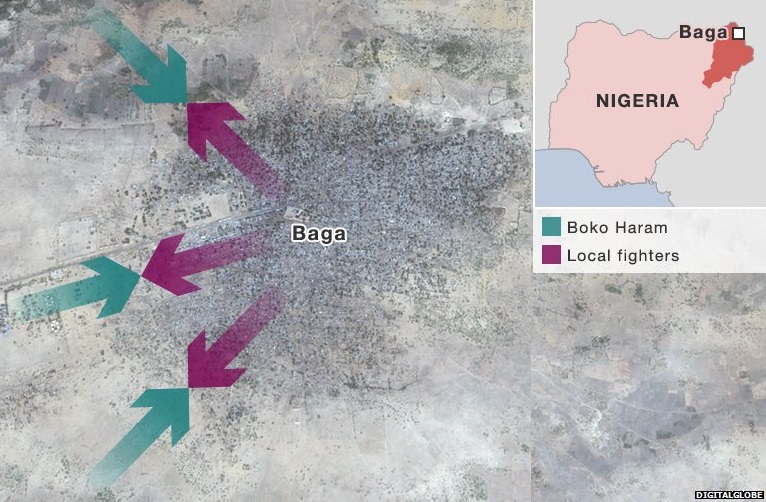 Scores of men, women and children were killed in the Nigerian towns of Baga and Doron Baga on 3 January when Boko Haram militants launched a fierce attack. The exact number of dead remains unknown, but claims vary from 150 up to 2,000 people killed. The BBC met survivors at refugee camps in Chad in order to piece together a picture of what happened that day.

Many inhabitants had already gone to pray when gunshots rang out on Saturday, 3 January. The first raid started at about 05:45 local time (04:45 GMT), just before dawn.

As Boko Haram fighters rushed through the west side of Baga, a group of determined young men collected their “cutlasses” – or machetes – and knives to defend their town. It was a rare success.

“We pushed them back, together with our soldiers,” said local man Harun Muhamad, 31.

The Islamist militants were forced to retreat into the bush.

“We all came out en masse to fight back,” recalled 20-year-old Dahiru Abdullahi, adding that most fighters were wearing army uniforms of different kinds.

“Some also had black coats on and turbans,” he said. Such headwear is common in this desert area, where insurgents often use them to cover their faces.

After the militants’ retreat, there was a lull in the … Must read full, see images: http://www.bbc.com/news/world-africa-30987043