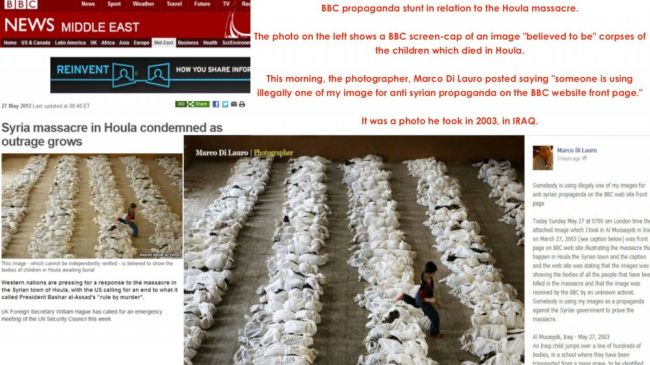 May 28th, 2012
PressTv- Britain’s state-run broadcast BBC has been heavily criticized for using a fake photo of Iraqi dead children in order to sell a new NATO-led invasion, this time targeting Syria.

This May, 2012, the British state-run broadcaster BBC has been caught passing off an old photo from Iraq in 2003 for the massacre in the Syrian town of Houla.

In a report published hours after the massacre, the network used an old photo of dead Iraqi children taken in Al Mussayyib that was first published over nine years ago and presented it as a photo of victims of the recent massacre of civilians in the town of Houla in western Syria, The Telegraph reported.

The photo shows a child jumping over the dead bodies of hundreds of Iraqi children who have been transferred from a mass grave to be identified.

Britain’s state-funded news network later published the same story with a new photo showing a UN observer looking at the bodies of the Houla victims.

The photographer who took the original picture, Marco Di Lauro, posted on his Facebook page, “Somebody is using my images as a propaganda against the Syrian government to prove the massacre.”

As the BBC came under fire for trying to sell a NATO-led attack on Syria, a BBC spokesman has shirked responsibility for checking the authenticity of the image saying the image had been used “with a clear disclaimer.”

“We used it with a clear disclaimer saying it could not be independently verified”, said the spokesperson.

Independent media outlets have criticized the British media for turning into “a rolling propaganda mouthpiece for the claims of dubious anonymous ‘activists’”, as described by American journalist Alex Jones’ website prisonplanet.com.

However, documented evidence showed the source of the reports was a London-based organization calling itself ‘Syrian Observatory for Human Rights’.

Prisonplanet.com has accused the British media of trying “to sell a NATO-led attack on Syria” while analysts say the statement “it could not be independently verified” has turned into a trademark of media coverage of the events in Syria.