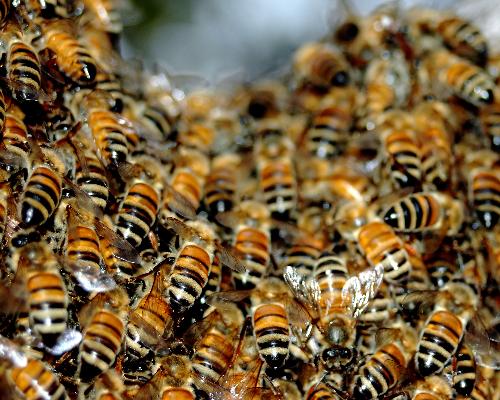 NewsRescue– Sheikh Gumi has been known for his fiery stance and no nonsense, no tolerance for the Boko Haram cult and their terror menace activity, sermons in Kaduna, Nigeria. He recently advised all Imams preach against Boko Haram, who he called the worst enemies to Muslims and the noble prophet of Islam; Boko Haram – a stain to the Ummah, it is the duty of all Muslims to fight them and report them  to law.

Sheikh Gumi also expressed his empathy to the plight of fellow Christians, being plagued by the Boko Haram terror menace, and invited Christians to join Muslims in breaking Ramadan fast feasting this weekend.

Therefore it is not surprising that several media reports have speculated that these terrorist bombers where on the way to attempt to attack Sheikh Gumi, as the explosion occurred less than five minutes from the Mosque he preaches at.

But the swarm of bees reported in media stories that was around the dead bodies, adds other questions to this event. It was reported that the terrorists on the bike dropped their explosive which then exploded on them, taking them to the great beyond.

Pending results of any autopsy, some have suggested that in a miracle from above, bees must have stung them, causing them to loose control and drop their equipment of harm and terror. The bees then still kept guard over the dead menaces. With our security services’ level of investigation, we may never know, or as brother Hamza put it, ‘Our Lord knows best’.

Sheikh Gumi was warned that Boko Haram have listed him for attack, and is in Prayer

According to one of his relatives who did not want to be identified, in the early hours of Tuesday Gumi received a call from a top security official who advised him to be security conscious as his name prominently featured in the list of those that may be attacked.

The source said it was after that warning that a bomb blast occurred a few meters from the home of their patriarch (late Sheik Abubakar Mahmud Gumi) on Modibbo Adama Road, where the younger Gumi is also residing.

The source said, “This morning our brother received a [ phone call] advising him to be security conscious, because some terrorists are planning to attack him for reasons best known to them, he started praying for his protection and suddenly this attack. Our brother was home when the explosion occurred at the tail end of our street. We heard it and after some time he followed another route and drove straight to Sultan Bello Mosque for sermon (Tafsir).”

SaharaReporters also heard audio directly from Sheik Gumi confirming what his relative told us.  In it, Gumi said, “As I am just coming now after a long silence of these unnecessary explosions and bombings, we heard an explosion very close to our house. And in the morning today from a senior military security that they have a list of people that were targeted for a terrorist attack and that I am among them.  Now the question is the high cadre of our military intelligence know that we are target, and yet this morning I was told and there was a bomb explosion we never heard near our house just by the corner of the main road. So what I am saying is to emphasise that we have serious insecurity problem.”

It was unclear whether the suspects were headed toward the mosque, which is located about a five-minute drive from the blast. ..

The cleric at the mosque had also recently invited Christians to break the Ramadan fast with Muslims this weekend. – NVS/AP

Here is the story from SunNews:

Swarm of Bees over dead attackers

Two persons suspected to be suicide bombers were yesterday killed in Kaduna when objects alleged to be Improvised Explosives Device (IED) exploded on them.

He said forensic experts were already there to work on it.

The incident, which occurred at about 4p.m., also claimed the lives of three others, including a motorcyclist, who was said to be heading towards Ungwan Sarki area of the metropolis.

However, unconfirmed report said scores of passersby were killed in the explosion, just as many more were said to have died in a hospital.

There was no official confirmation as to what target the bombers were heading to, but eyewitnesses pointed at major military checkpoints and a popular mosque along the area as possible targets.

When Daily Sun visited the scene, armed soldiers and other security men were seen collecting the charred bodies of the victims, just as they cordoned off the area.

This was even as swarm of bees from nowhere took over the scene of the bomb explosion, making it difficult for security men and other officials of government agencies to immediately pick the dead bodies.

Hundreds of onlookers who besieged the area as soon the explosion occurred had to cut leaves from nearby trees to ward off the bees, even as the police threw canisters of tear-gas to help in keeping the bees off the area.

As at the time of filing this report, three motorcycles bombed in the incident were still lying on the spot.

An eyewitness, who gave her name as Rita James said: “I was in the house when I heard a loud sound, it even shook our house and we ran out to look at what happened, only for us to see three persons and three motorbikes lying on the ground. But at a point, we couldn’t get nearer because of bees, we don’t know where the bees suddenly came from, they were stinging people.”

Two people carrying explosives on motorbikes were killed by their own bombs in Kaduna yesterday, witnesses said, suggesting that the bombers targeted Islamic scholar Ahmad Gumi who recently criticised attacks blamed on the Boko Haram sect.

Only the bomb carriers died in the incident which happened at about 3.35pm on the busy Ali Akilu Road.

Witnesses said the bike-bombers appeared to be heading towards the Sultan Bello Mosque where hundreds of Muslims were gathering for Sheikh Gumi’s Ramadan Tafsir which was due to start in less than 30 minutes.

They said Gumi uses the same road to go to the mosque for the preaching session, which has been holding daily from 4pm since the beginning of the Muslim fasting month that ends at the weekend.

“(The bombers) were heading for Sultan Bello Mosque but before they reached the roundabout, we heard a loud explosion and three of them died instantly,” said a witness, Kaduna polytechnic student Idris Mustapha.

“Two were riding one of bikes while another person who we believe was part of them, was driving behind them. Then there was a loud blast,” he said.

Another witness, Jamilu Ibrahim, said, “The bomb was being carried by two people, a woman and a man on top of Okada, when the explosion happened. There were no people close to them and it only affected the people that were carrying it.

“We suspect that the bomb was being carried to Sultan Bello Mosque where Sheikh Ahmad Gumi is holding his Tafsir. It was the same area a policeman was killed by a bomb.”

Soon after the blast, security men cordoned the roadway, diverting traffic from the Lugard Hall roundabout.

Destroyed parts of the motorcycles and human body parts were strewn on the road.

There was a mild drama when bees swarmed the blast scene, stopping people and security men from coming close to the area.