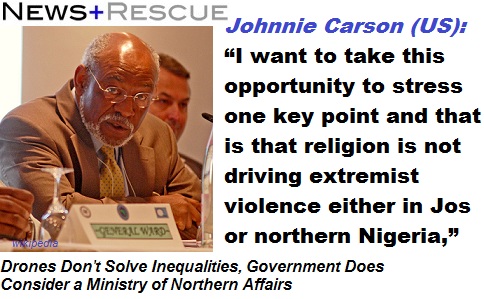 NewsRescue– On June 23rd, after the US put three Nigerians on the terror list, but stopped short of declaring the entire Boko Haram group as a global terror group, a Nigerian Muslim group, MuslimsAgainstTerror.com requested the US list Boko Haram, to foster a more rapid elimination of their threats.

In our article on June 29th, we highlighted that the US Obama administration has been mum on the issue of violence and foreign support and meddling in Nigeria.

Today, the Christian Association of Nigeria, CAN, called for US intervention, in reaction to terrible events in Jos in the past 7 days, starting with the Nigerian Special Task Forces(STF), supposed to defend crises, being accused of using armored vehicles and helicopters to burn an entire Fulani village to the ground, this event triggering attacks between Berom Christians and Fulani natives, who have been at war over land issues for quite a while.

And culminated in terrorists, with the Boko Haram group claiming responsibility, targeting and killing over 80 Christians, including a Senator at a burial. And then Berom Christian youth taking their anger onto the streets and killing an estimated 100 Muslims, Hausa’s or Fulani’s, who happened to be traveling at the wrong time, wrong place.

The US however, responded through its official, Carson, as it has in the past, that the root cause of trouble in Nigeria is gross inequalities and government neglect. Areas where violence commonly erupt are the poorest and most neglected parts of the country. The North East of Nigeria has been compared in poverty levels to Chad, Mali and Eritrea, whereas, as related by Nigeria’s former Central Ban Chief, Soludo, the Southern economy compares to China and South Korea. ‘Poverty in the North, a May day call’.