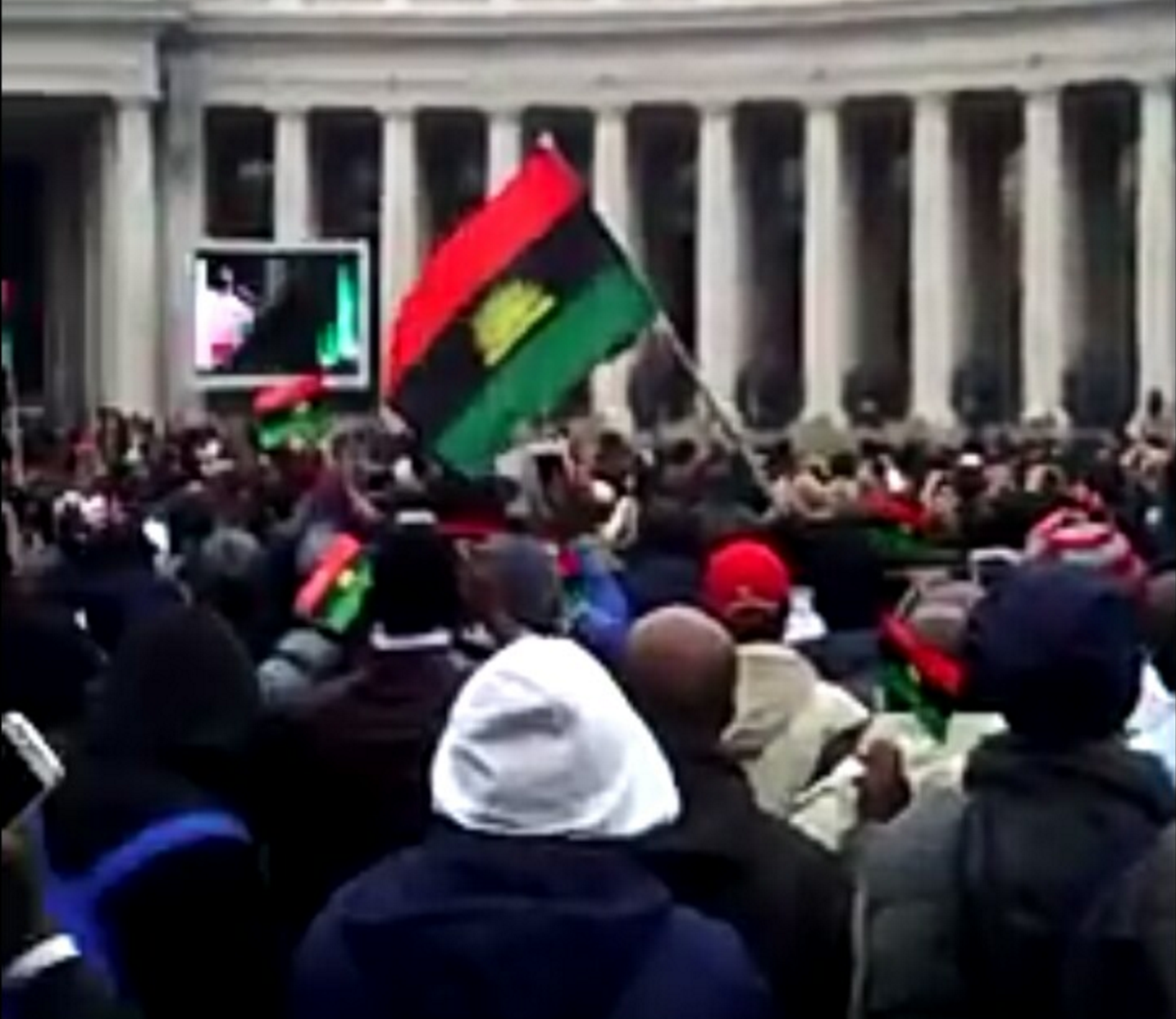 The Indigenous People of Biafra, IPOB, yesterday welcomed the statement credited to President Muhammadu Buhari to the effect that Nigeria would not tolerate Biafra, pointing out that Biafra would also not tolerate Nigeria.

Spokespersons of IPOB, Emma Mmezu and Dr Clifford Iroanya who spoke for the organisation in a statement entitled “Response to Ohanaeze and Buhari’s disparaging remarks about Biafra on Al Jazeera,” said: “We wish to reiterate for record purposes that our leader, Mazi Nnamdi Kanu has not mandated Ohanaeze or any  youth group to negotiate for his release.

“The agitation for Biafra is a long and arduous process and the entire IPOB family all over the world understands this approach as espoused by our detained leader.

“We have not come to merely agitate, we have come to restore or die in the process. Some people think we are joking or can be easily dissuaded from this divine path that God-Chukwu Okike Abhiama has mandated us to follow.

“Any negotiation on Biafra must be led by Nnamdi Kanu and nobody else. If roads, bridges and a few junior staff at Aso Rock are our problems as Biafrans, then IPOB worldwide can fund such infrastructural development alone and very soon, we shall do it. Our quest is Biafra- nothing more, nothing less.

“On the issue of Buhari’s Aljazeera interview on Biafra, we welcome his comments because Biafra would not also tolerate Nigeria. Lord Lugard created Nigeria not Chukwu Okike Abhiama, God Almighty. So, like USSR, it will collapse. We, the IPOB Worldwide have decided not to go back on the quest for restoration of Biafra. Nigeria is not bigger than USSR just as Buhari is not stronger than Michael Gobachev. Buhari can kill Biafrans as he did during the 1967 to 1970 civil war, but this time, it will not be the same.”

Meantime, a palpable trepidation is rife in the South-East geopolitical zone following yesterday’s warning from the Movement for the Actualization of the Sovereign State of Biafra, MASSOB, and the Indigenous People of Biafra, IPOB, directing all Fulani herdsmen engaged in pastoral activities to retreat to the northern part of the country as their safety can longer be guaranteed.

The pro-Biafra groups said it has become imperative for the Fulani herdsmen to leave the region as it can no longer, “tolerate the systematic killing of our people and invasion of our land in the name of cattle grazing.”

In a statement signed and made available to newsmen in Enugu yesterday, MASSOB Leader, Uchenna Madu, revealed that it has mobilized its allies to ensure that its directive was heeded. According to Madu, ”we can no longer tolerate the systematic killing of our people and invasion of our land in the name of cattle grazing. Seventy per cent of Fulani herdsmen in the eastern region are Northern-trained secret army assigned for devastation and secret killing of Biafrans.

“MASSOB in collaboration with IPOB and other affiliates have vowed to protect Biafra land with enthusiastic spirit and  motivation  from foreign invaders in any disguise. As we have resolved to protect Biafra land, we warn Arewa secret army in disguise as Fulani herdsmen to concentrate on grazing with their cows as any further attack on our people shall be squarely returned.”

On the actualization of Biafra, MASSOB leader described President Muhammadu Buhari’s stance on the futility of Biafra secession from Nigeria as the,”ranting of a frustrated man who has lost major focus on international/diplomatic politics.

“The level of Biafra actualization has gone beyond Buhari’s imagination and comprehension. As long as Ndigbo and easterners in general live, Biafra can never be subdued by Nigeria. We advise the international community to ignore Buhari’s diplomatic propaganda against Biafra.

“We will continue to toe the line of non-violence in our pursuit for Biafra and will not lower our guard to continue to press for the release Nnamdi Kanu,Ben Onwuka and other pro-Biafra detainees in prisons scattered all over the country”.

Peeved by the recent killing of some people believed to be members of agitating Indigenous People of Biafra, IPOB, whose corpses were dumped in some burrow pits in parts of Aba, Abia state, allegedly by security operatives, a civil rights group, International Society for Civil Liberties & the Rule of Law, has written to Governor Okezie Ikpeazu to rescue the corpses and preserve them for proper autopsy that would aid investigation.

The group also charged the governor to ensure “that justice be done to the victims, their families and the people of Abia State and Nigerians as a whole.”

The group in the letter, signed by its chairman, Comrade Emeka Umeagbalasi, urged Governor Ikpeazu to urgently intervene and safely secure the corpses to aid investigation.

“Sadly, the corpses have remained abandoned and un-evacuated by the government of Abia State  till date. The corpses were covered with leaves and soaked with chemical substances strongly suspected to be a mixture of raw acid and embalming chemicals; for the purposes of disfigurement, erasing traces and making the corpses odourless.

“As at our last checks on Sunday, February 28, 2016, and Wednesday March 2, 2016, the 13 corpses were still there. There is also discovery of another three corpses of murdered citizens, strongly suspected to be members of the Indigenous People of Biafra, IPOB, in Abia State.

“The purpose of this letter of ours is to formally bring to your attention the carnage stated above  and to demand that justice be done to the victims, their families and the people of Abia State and Nigerians as a whole,” part of the letter said.