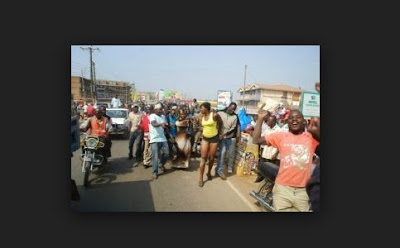 How much is a phone, lady? Why not work and get yourself a good phone instead of stealing

The lady was allegedly caught at Robinson Plaza in Warri, Delta State on Monday afternoon with a stolen Tecno boom J8 phone, and she was publicly manhandled, and beaten to pulp by an angry mob.

The crowd were reported to have humiliated and abused her with all sort of sticks, pipes and rod. Before the police could arrive and rescue her, the guys had gone extreme as she was stripped.