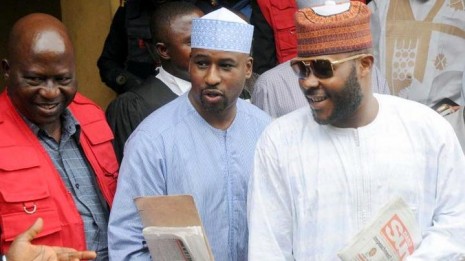 Nigeria has never seen anything like it. This story explains how unscrupulous marketers fleeced the nation of N382 billion without supplying a drop of petrol.

CORRECTION: This post has been updated to reflect the correct ownership of CEOTI Ltd. The error is regretted, and we sincerely apologise to those our lawyer mistakenly listed as directors of the company.

The scale is huge; the method daring and unprecedented. The plot seems like one in a James Bond movie as unscrupulous Nigerian businessmen scripted an unbelievable heist.

It was a grand deceit, never seen in Nigeria’s history. To benefit from the 2011 fuel subsidy largesse, the oil companies “manufactured” fictional oil ships (vessels) they claimed traversed seas and oceans of the world carrying imaginary petrol, with Nigeria the final destination of the product, the Technical Committee set up by the Federal Government discovered.

For supplying this phantom product to Nigeria, the seven companies involved pocketed a princely N13 billion naira from the 2011 fuel subsidy payments, the committee’s report, secured by PREMIUM TIMES, stated.

Some other companies, not wanting to create fictional vessels, decided to space- travel existing ones; such that real vessels, which were definitely in countries like China and UAE, discharged petrol into storage depots in Nigeria at the exact time they were in those other countries. The 11 companies involved in this category of fraud pocketed N21 billion from the 2011 subsidy payments, the report stated.

Sources in the oil industry reveal that these companies were able to perpetuate this crime with the help of field officers of the Petroleum Products Pricing and Regulatory agency (PPPRA) and the Department of Petroleum Resources (DPR), men of the Nigerian Navy, Nigeria Custom officers, banks and others involved in the various stages of fuel importation.

These and other fraudulent acts by beneficiaries of the fuel subsidy led the committee to conclude that “all the affected oil marketing and trading companies found to have violated various aspects of the PSF guidelines … should refund the subsidy payments for a total sum of N422, 542,937,668.59 (four hundred and twenty two billion, five hundred and forty two million, nine hundred and thirty seven thousand, six hundred and sixty eight naira, fifty-nine kobo).”

To get the details of fraudulent transactions involving ships, “a review team (set up by the committee) made up of experienced bank auditors,” used methods such as tracking “the location of mother vessels with the Lloyds List intelligence.”

The list is the internationally reliable method of determining the location of any vessel at any point in time.

The committee’s report has since been reviewed by another Presidential panel headed by the same person. However, most of the findings and recommendations remain, with the indicted firms now expected to refund N382 billion

On Wednesday, October 19, 2011, a vessel, MT Zhen Star, purportedly arrived in Nigerian waters. The 58,000 metric tonnes of petrol contained in the vessel was owned by two companies: Masters Energy Oil and Gas Limited; and Caades Oil and Gas Limited.

The irony however is that the vessel, MT Zhen Star, does not exist and no fuel was imported. The two companies, with the complicity of the stated public officials, successfully duped Nigeria of N3.9 billion.

While commenting on this fraudulent transaction, the technical committee, headed by Aigboje Aig-Imoukhuede, stated that “the subsidy on this transaction must have been wrongly paid since MT Zhen which was supposedly used could neither be located on the Lloyds List intelligence nor anywhere on the West African Coast.”

Other companies that created such fictional ships to get their share of the subsidy largesse are Matrix Energy Limited, Top Oil and Gas, Ocean Energy Trading and Services Ltd, Down Stream Energy Source Limited, and Ceoti Limited.

However, unlike the House of Representatives, which clearly called for the prosecution of fraudulent beneficiaries of the petrol subsidy, Mr. Aig-Imoukhuede’s committee was lenient, even in its choice of words. It only recommended that such illegal payments be recovered.

Unable to create fictional vessels, some companies space-travelled real ones.

When Brilla Energy Limited submitted its subsidy claims for the last quarter of 2011, it claimed to have imported 13,000 metric tonnes of petrol. The oil was brought into Nigeria by the vessel, MT Delphina Ex MT Overseas Limar, which arrived at offshore Cotonou, Benin republic.

On October 1, a vessel, MT Dani, was used to transport the petrol, from the original vessel, into a storage depot in Nigeria, a delivery which was witnessed by the appropriate officials.

From this transaction alone, Brilla got a subsidy payment of N1 billion.

However, contrary to Brilla’s claim, the vessel, MT Delphina Ex MT Overseas Limar, was in China on October 1.

“There is no basis for the subsidy payment since the mother vessel (MT Delphina Ex MT Overseas Limar) was nowhere near the West African coast at the time of purported discharge of PMS,” the committee established.

Apart from Brilla, 10 other companies were involved in such deceit with Nigeria paying N21 billion for the phantom products. Some of the companies involved are Capital Oil Plc, Obat Oil and Gas, Matrix Energy, and A-Z Petroleum Limited.

Again, the committee failed to recommend any prosecution of culpable companies. Failure to prove the location of the importing vessels, the companies “should refund all monies received in full,” while the role of PPPRA in the deals should be investigated.

On December 20, 2011, Nasaman Oil Services Limited claimed it discharged petrol from a vessel, MT Hellenic Blue. The vessel had berthed on the waters of the Republic of Benin, offshore Cotonou, the oil company claimed.

Contrary to the company’s claim, MT Hellenic blue had been dead and unused since February 17, 2010. Four years before its death, the ship had its name changed to MT Nireus.

It was this dead and defunct vessel that Nasaman claimed delivered its petrol. Nasaman and five other companies, with similar ships miraculously raised from the dead, received N8 billion as subsidy from such transactions

Several months earlier, Nasaman made N750 million from the subsidy fund, when it claimed it received 7,500 metric tonnes of petrol from a vessel, MT Overseas Limar, off the Cotonou coast, on January 27, 2011. The ship was in the US Gulf on that day.

Another method, discovered by the committee, used by oil companies to fleece the government include falsification of bank documents presented to the PPPRA.

PREMIUM TIMES had reported exclusively on how fake bank documents (Letters of credit, Form M, etc) were allegedly submitted to the PPPRA , by petrol importers in collaboration with bank officials, and how the agency wrote to the Central Bank of Nigeria for authentication of the documents.

The CBN refused to either verify the documents or respond to the PPPRA’s letter.

“The disclaimer of these transactions by the banks shows that they did not exist in the first place and consequently, there was no basis for the payment of subsidy claims,” the committee stated.

Top of the companies involved in this falsification is A-Z Petroleum, which got N2.3 billion from four of such deals. Oando Plc, which prides itself as ‘sub-Saharan Africa’s leading integrated energy group’ also had one transaction of N1.3bn, disclaimed by the alleged sponsoring bank, although the company has since refuted the finding.

Again, despite the criminality involved, all the committee recommended was a refund of the subsidy collected from such payment.

Despite the alleged role of banks and bank officials in the fuel subsidy scam, and as reported exclusively by PREMIUM TIMES, the committee did not investigate the culpability of banks in the scam.

Several of its findings indicate that the banks had knowledge of some of the fraudulent transactions going on.

In one of its findings, the committee stated that “112 transactions did not have evidence of sale proceeds based on banks’ available records at the date of the verification.” The subsidy paid for these transactions was N157 billion.

In other words, the banks received the N157 billion on behalf of the companies even when there was no evidence before it that the companies sold any fuel. None of the 19 banks, which financed the 2011 fuel imports, as reported earlier by PREMIUM TIMES, complained to the CBN or the PPPRA about such transaction.

The committee had three senior bankers as members, with Mr. Aig-Imoukhuede, the Group Managing Director of Access bank, as head.

“It is like witnessing a crime. If you don’t report it appropriately, knowing that you will benefit from, then you are definitely an accomplice,” a banker involved in oil and gas banking stated.

We can’t recover everything

Although the Economic and Financial Crimes Commission has already commenced prosecution of some of the indicted companies, Mr. Aig-Imoukhuede has advised Nigerians not to expect all the N382 billion to be recovered.

“It will be naïve that we can recover the whole amount,” he said. “The most important thing is that the State diligently pursues recovery to its logical conclusion.