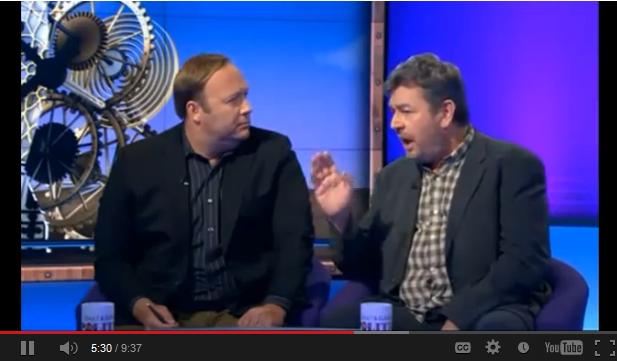 Alex Jones confronted Bilderberg member and UK Shadow Chancellor Ed Balls shortly before a live BBC broadcast on which Jones was a guest, before Balls was ambushed again in the corridor about breaking the ministerial code by taking part in a secret lobbying meeting.

As we reported earlier this week based on police and government sources, Bilderberg has been under intense pressure to go public about what takes place behind closed doors and a taxpayer-funded half mile ring of steel at their annual confab. Our sources were proven to be correct when not one but two members of Bilderberg were forced to go public.

Bilderberg’s attempt to hide in plain site and have their shadow government come out of the closet without making a splash failed when Balls was forced to downplay the influence of the group live on the BBC, despite innumerable examples where the organization has steered world events. In addition, Bilderberg steering committee member and MP Ken Clarke was forced to address the issue during the BBC Sunday Politics show.

Treasury official Balls sidestepped the question about breaking the ministerial code, which states that MP’s cannot attend private meetings without disclosing details to the public, by claiming that he was not a minister – an overt lie because Balls swore an oath to uphold that very code when he became a Member of Parliament in 2005. Balls attended Bilderberg meetings before he became Shadow Chancellor. Officials are also supposed to have a secretary on hand making minutes, which is not the case at Bilderberg.

Just like the NSA wiretapping issue and innumerable other scandals, illegal activity is being conducted in plain site at Bilderberg when British officials like Balls and Prime Minister David Cameron attend Bilderberg with no public disclosure.

During his appearance live on the BBC, Alex Jones blew Bilderberg wide open, exposing the organization’s Nazi origins and its central role in coordinating an authoritarian agenda that has zero regard for transparency or the democratic process.

We now have the shadow government on the run. They are being forced to go public and re-brand Bilderberg’s public facade after decades of secrecy which was achieved with the aid of mainstream media complicity.