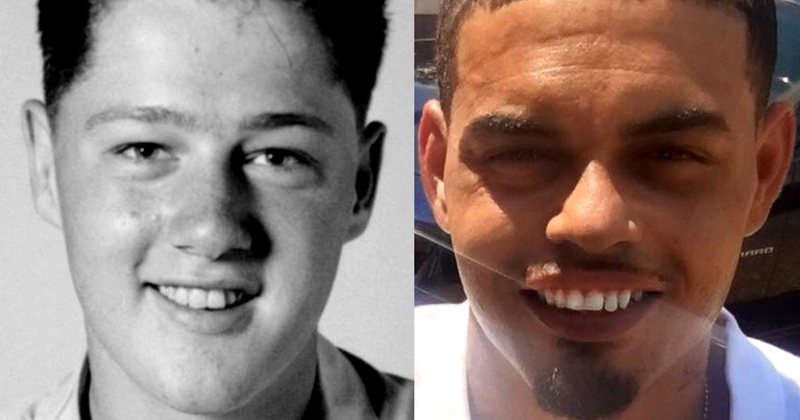 My name is Danney Lee Williams. I have many compelling reasons to believe that I am the biological son of former President William Jefferson Clinton — also known as Bill Clinton.

I am simply seeking the truth, and thus I am respectfully requesting that former President Clinton supply a court verified sample of his DNA to be compared with mine to determine paternity.

Before passing judgment, I ask the citizens and media of this great nation to honestly review the evidence and my reasoning. I also would like to shed light on how the widely reported DNA test in 1999 – which allegedly disproves that he and I are not father and son — was in fact fundamentally flawed in how it was executed and reported thereafter.

In 1999, various news organizations including the Washington Post and Time reported that I was not Bill Clinton’s son based on a widely reported DNA test that was based on the DNA report included in independent counsel Kenneth Starr’s impeachment report and a DNA sample that was taken from me. This is false. In fact, the test proved to be inconclusive because the Starr report did not contain the necessary data to reach such a conclusion.

The Starr report only included the results of a polymerase chain reaction (PCR) that the FBI used to determine whether Clinton’s DNA matched Ms. Lewinsky’s dress. In fact this is not enough data to determine if Bill Clinton is my father or not. FBI lab’s test refraction fragmented length polymorphism (RFLP) would also be required to make this determination. The PCR test alone would not be enough to legally prove or disprove paternity.

The truth is that in 1985, during the time I was conceived, my mother was a single parent raising two boys on her own. She would sometimes sell herself to men to make ends meet for her family. During this dark period in her life, Governor Clinton was the only Caucasian man she was having sexual relations with at the time I was conceived. In 1997, my mother passed a lie detector test conducted by investigative reporters to corroborate her claimed that Bill Clinton was her only white suitor at the time she conceived her bi-racial son.

I have seen also the physical resemblance between myself and President Clinton — the facial features, nose, chin line — that strongly suggest a biological connection, which has been pointed out by thousands of people across the nation.

For 30 years, my mother has stood firm on the claim that Bill Clinton is my father, and never once has she recanted her story… nor has my Aunt Lucille, who bared witness to my mother’s account.

According to my mother and aunt, when President Bill Clinton was governor, he took on some responsibility as a parent, by providing some financial assistance.

They both told me that a man driving a car with state tags, placed an envelope of cash in my mother’s mailbox every month and that the envelope always included seven crisp $100 bills.

They also told me that an Arkansas State Trooper brought Christmas presents to our home for me every year.

I read a retired State Trooper Larry Patterson also confirmed this in his book which I bought in a yard sale one summer. To me it seemed that President Clinton wanted to be involved in my life, even if it was only in the smallest capacity.

I believe that President Clinton is my father for multiple reasons.

Aside from my mother’s account of her relationship and the unwavering insistence of my Aunt Lucille, many individuals from different walks of life have reinforced these claims, some of whom knew me as a child or worked with my father.

My existence and relationship to President Clinton is an open secret amongst the political elite circles in our home state of Arkansas.

I also know my Aunt Lucille took me, as an infant, to the governor’s mansion to inform Mrs. Clinton that Bill Clinton was my father and demand that he support me.

She snuck in the front gate when it was opened and demanded to see Mrs. Clinton.

They slammed the door in her face. Arkansas State police officers literally chased my aunt and me from the building. They ran us off like dogs.

Lucille Bolton, a respected woman in her church, is alive and well and stands by this account. My Aunt Shirley, with whom I spent a lot of time when I was younger, backs the account.

More complete and verified DNA sample from Bill Clinton would serve to either corroborate everything I believe or put this matter to rest so that I can close this chapter of my life and move on.

Regardless of my timing, I have no political motivation; I am solely seeking the truth. For years I have made several attempts to have my story heard, but the mainstream media has ignored me.

Due to my persistence and the work of my family and many friends, my story has been spread and is being positively received. This has given me the courage to continue to speak out and ask these questions.

I hand delivered letters I wrote to my father, our 37th President, and gave them to the nice lady at the desk at the Clinton Library. I also mailed letters and pictures of his grand children to him in Washington, but he never answered.

I believe that if there is a chance for me to have a personal relationship with my father I should pursue it. In addition, now that I am a father myself, I want my children to know the truth.

At 30 years old with five children of my own, it is time for me to know the truth. I feel that if I do not pursue the truth now, I will regret my decision for the rest of my life.

Those who ask why I am raising this now don’t know I have talked to every reporter who ever contacted my mother or me.

I have been asking these questions on Facebook and the internet for almost two years even when I had to go to the Library to use the computer there. This is not about politics or money. For me it is about finding the truth and understanding, finally, who I am and where I came from.

If and when a DNA test proves that President Clinton is my father…I just want to meet him and shake his hand.

I want my kids to meet their grandfather, a simple man from Arkansas who became the leader of the Free world. In essence, I am seeking what all sons desire from their fathers—acceptance. That is all I seek.

It is my hope that my step mom, Mrs. Clinton, will not allow politics to interfere with my need to know the truth. That is why ask that Mrs. Clinton encourage her husband to do as I ask, to demonstrate her stated belief that all black lives matter, even those which might reveal an inconvenient truth.

Dr. Henry Lee, one of the world’s foremost forensic scientists told the New York Daily News “You would need to put President Clinton’s [DNA] side by side, using RFLP,” to determine paternity.

Slate reported, “The FBI performed two genetic fingerprinting tests on the president’s DNA. The Starr report, for unexplained reasons, gives data only for the less specific of the two tests. In fact, this test is imprecise enough that it would probably not be persuasive to a judge… (to determine paternity).

Snopes.com cited the evidence published in 1999 by Slate, concluding that without obtaining a sample of Clinton’s blood, the DNA released by Starr was insufficient to prove one way or another whether he was or was not Williams’ father.

The point is that proof simply does not exist.

Clearly, had there been a definitive laboratory DNA test avilable that met judicial standards that proved Clinton was not Danney Williams father, Snopes.com would have concluded the paternity story was “false,” not “unproven” – a conclusion that strongly suggests the jury is still out, with the physical resemblance still suggesting, as it did to the Star editors in 1999, that Danney Williams is Bill Clinton’s black illegitimate son.

Also troubling is the fact that the STAR tabloid that first hyped and then conducted, was owned by Robert Altman – a close friend and college classmate, political supporter, major donor and federal appointee of Bill Clinton, owned the STAR tabloid, which claimed to have conducted the DNA test. The Editor admitted later he had not seen test results.

The STAR hyped the story substantially; promising bombshell results before the “test’ was conducted, then did not publish the test results but announced that the test “did not prove Clinton was Danney Williams father.” It didn’t prove that I was or wasn’t. It proved nothing. The test was incomplete and thus inconclusive.

A friend of mine who is active in Arkansas Young Democrats, thinks this disinformation campaign was meant to tie up the loose end of Danney Williams before Hillary Clinton’s 2000 US Senate Race.

For more information go to: ClintonSon.com