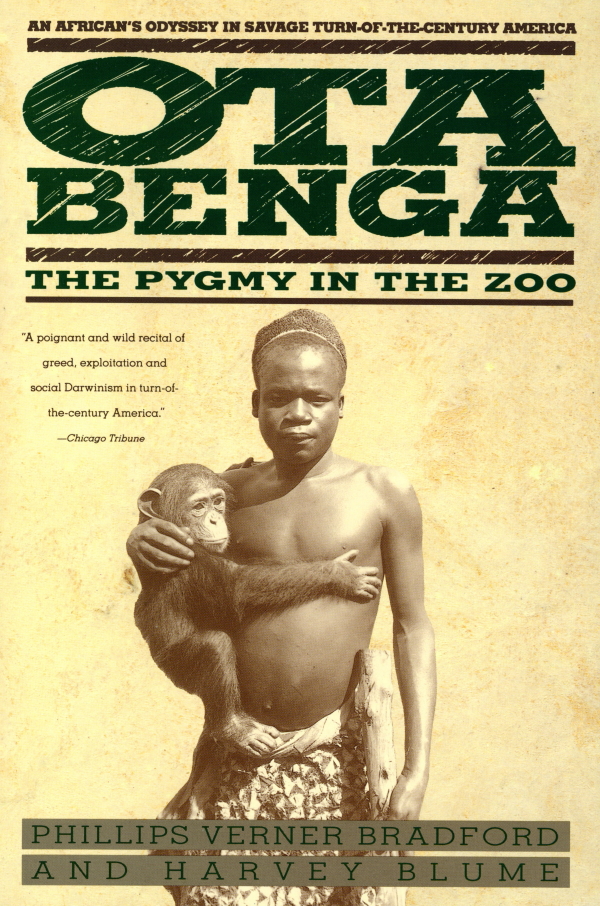 NewsRescue- Sadly feels like we are back to the early 90’s, when the Darwin racist evolutionary theories were fresh, and Africans were kept in US zoos. Many of us remember the story of Ota Benga, the pigmy from the Bachichiri family in the Congo, who was locked up, exploited and put on exhibition in the Bronx Zoo, New York up until 1916 when he decided to take his own life…yeah a thing an animal would not do. This happened under the watch of the then ‘United Nations’, ‘League of Nations’ as it was called, and of course US government.

The shocking video above is not an occurrence from the 90’s, it is happening right now and no one is talking about it, indeed you won’t see this in CNN, no, they are too busy covering Kony 2012, the ‘Invisible children’, or do we say, ‘Visible motive,’ campaign of Jason Russell to garner support for another Obama-US invasion and US deposition of AFRICOM troops in Uganda, where oil was recently discovered. Funny that Joseph Kony and his LRA, the victim of this media pushed campaign has been defunct and silent for the past 5 years.

The Real Crises in Uganda and Central Africa: Worse than the Holocaust- No, Not Kony 2012

And Africa’s most populous nation’s president, Goodluck Jonathan of Nigeria is not expected to scream and declare war, over the disrespect and degradation of black Africans in Libya, because as we recollect, he was one of the first African leaders to recognize the NTC post Gaddafi, terrorist leadership of Libya. Yes it is a terrorist leadership, everyone has seen the Alqaeda flag has since been the symbol of the victory, even placed above a court house in Libya, and all have seen how the deposed Gaddafi was sodomized by these barbarians. We also have seen images upon images of brute torture coming out of the new NATO-Obama Libya.

Images of brutal torture from the new NATO ‘liberated’ Libya

Indeed NTC commanders are known Alqaeda members. John Brennan we remember, acknowledged that the US was working with terrorist organizations, precisely, AQIM (Alqaeda In the Maghreb) and LIFG (Libya’s arm of Alqaeda) to depose the Libyan ruler. According to reports, Alqaeda terrorists even were airlifted into Syria by NATO forces. Just as Secretary of state, Hilary Clinton is again acknowledging joint work with Alqaeda and Hamas in the overthrow of Syrian government.

Libya is the first official terrorist state in the world, and will not likely be the last as the world people’s remain complacent.

And what more need be said about this new NATO-Obama Libya and its terrorist leaders? Well they really can’t put it together- Libya Breaking Apart: Factions Declare Independent State, Call For Federalism.

Here is the story from the UK Dailymail:

A shocking video that appears to show Libyan rebels torturing a group of sub-Saharan African detainees has appeared on YouTube.

The footage shows a dozen or so men – suspected by Libyan rebels of fighting for the toppled government of Muammur Gaddafi last year – held in what looks like a caged zoo enclosure.

They each have their hands tied behind their back and are sat on the cage’s dirty floor.

More objectionably, each has the old Libyan flag stuffed into his mouth. 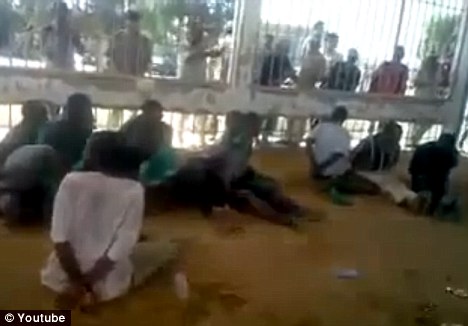 While a crowd of men gather round the enclosure jeering, their prisoners are made to hop on the spot.

The man filming the scene, who remains off-camera, can be heard shouting: ‘Eat the flag, you dog. Patience you dog, patience. God is great.’

It is impossible to verify whether the video, which was leaked onto YouTube last week, is genuine and where and when it was filmed.

It has emerged as the UN this week said that the Libyan revolutionary brigades accused of torture still hold captive three-quarters of detainees from the country’s civil war.

A lack of judicial police has prevented the government from taking control of more jails, the UN said on Wednesday.

Up to 6,000 detainees are estimated to remain in brigade facilities, while the Ministry of Justice has taken charge of eight detention centres holding 2,382 people.

The figures were revealed to the UN Security Council by Ian Martin, the UN special envoy for Libya.

Many of the detainees are sub-Saharan Africans whom their captors accused of being Gaddafi mercenaries, based in some cases purely on the fact that they have darker skin.

The UN human rights agency and aid groups have accused the brigades of torturing detainees during Libya’s nine-month civil war.

Mr Martin has urged the Ministry of Justice to accelerate the process of asserting government control over detention centres.

But he said: ‘Progress continues to be complicated by insufficient numbers of judicial police.’

He added: ‘We will continue to work closely with the authorities and to encourage them to ensure that inspections of known facilities are undertaken, that secret locations are identified and brought under government control, and that abuses are investigated.’

Accusations of the mistreatment and disappearances of suspected Gaddafi loyalists are embarrassing for Libya’s ruling National Transitional Council, which has vowed to make a break with practices under Gaddafi and respect human rights.

It is also awkward for the Western powers which backed the anti-Gaddafi rebellion and helped install Libya’s new leaders.

Gaddafi’s 42-year rule collapsed when his forces fled Tripoli in August, and the last of the fighting in Libya ended in October when he was captured and killed by rebels.

Libyan Ambassador Abdurrahman Mohamed Shalgham told the UN Security Council that detainees held by the government, including a number of former Gaddafi ministers and senior officers, were treated well.

Mr Shalgham said: ‘However, let me say that there are areas where the state has not been able to control. There is not police or courts in those areas.

‘We cannot be responsible for all excesses everywhere. We are against them, we object to them and we hold the perpetrators of such acts responsible.’

Mr Martin said that while the armed brigades lacked clear lines of command and coordination, they continued to perform important security functions often for long periods without payment.

He said: ‘Contrary to the impression given by some media reports, although they seek guarantees that the transformation for which they have fought is securely on track, there is little indication that they wish to perpetuate an existence outside state authority.’