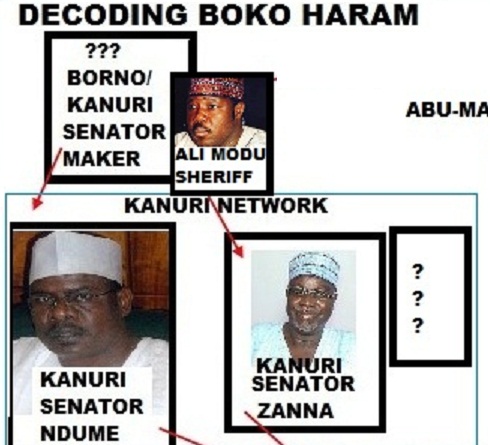 NewsRescue– Our must-read article on October 20th, illustrated the intertwine of Boko Haram in the fabric of Borno’s who is who’s and the Kanuri ethnic group, prominent in Damaturu and Borno, Boko Haram’s base. See: NewsRescue- Decoding Boko Haram: The Regional Ambitions and Permutations

The quoted media story below from ThisDay newspaper, brings to light the boiling feud between a Senator from Borno, Ahmad Zanna, whose nephew, Shuaibu Bama, apparently a known Boko Haram commander, was recently arrested and former Borno state governor and Senator, Ali Modu Sheriff, long fingered in Boko Haram etiology and believed to have created Boko Haram as political thugs- the notorious group came to being during his tenure:

The Joint Task Force (JTF) had last week announced the arrest of Bama in a serving senator’s house in Maiduguri.

Although the JTF did not mention the name of the senator, Zanna, who acknowledged Bama as his nephew, accused the JTF of distorting the facts of the arrest, stating that contrary to the claim, the Boko Haram chief was arrested in Sheriff’s house.

The senator, who was grilled for about nine hours in Abuja by the State Security Service (SSS) over his alleged links with the Islamic sect, blamed Sheriff for his travails.

Zanna, of the Peoples Democratic Party (PDP), defeated Sheriff, the All Nigeria Peoples Party (ANPP) candidate who contested to represent the senatorial district in the last general election.

Speaking with reporters before he left for the SSS headquarters, Zanna insisted that Bama was arrested in Sheriff’s house and not his.

He also said that he was willing to lead a Federal Government delegation to open talks with the sectarian group, if only it would help to end the insecurity in the country.

He blamed Sheriff for his travails, saying the former governor had not forgiven him since he defeated him in the last senatorial election.

“My historic defeat of the former governor of Borno State in the person of Senator Ali Modu Sheriff has never gone down well with many persons and individuals in this country.

“Therefore, this latest campaign by the JTF in Borno State to deploy falsehood against me, even though they arrested Shuaibu Bama in Sheriff’s house.

“That they choose to tell the world that they arrested him in my house, is part of the campaign to rope me in by declaring me a Boko Haram member, financier, sympathiser, harbourer or even an activist so as to declare my seat vacant.

“This is being perpetrated to pave the way for Ali Modu Sheriff to by hook or crook come to the Senate, no matter what,” Zanna added.

He also called for the immediate withdrawal of the JTF, adding:  “What I’m trying to say about the JTF is that they are not doing things according to the rules of engagement and they are unnecessarily killing people more than Boko Haram, so what is the use of them being there?”

According to him, the constitution does not allow the JTF to kill people at will.

He said the JTF had never consulted with the leaders or elders of Borno to resolve the insecurity challenges posed by the insurgency of the Boko Haram sect.

“The JTF did not consult the leaders in Borno at any given time; they went there and started harassing the people instead of them to sit down from the outset to discuss with the people of Borno,” he added.

He blamed the Boko Haram insurgency on the inability of leaders to separate politics from security.

Sheriff, in a rebuttal Monday, refuted Zanna’s claim that Bama was arrested in his (ex-governor’s) house.

The former governor, in a statement by his Special Assistant, Umar Duhu, described Zanna’s attempt to link him with his problem as laughable and mischievous.

He urged security agencies to fully investigate Zanna’s links with Boko Haram and allegations of gunrunning.

“On this note, we want to call on the relevant security authorities to fully investigate the incident and Senator Zanna’s possible links with Boko Haram, and also his hajj-by-road activities for which he was suspected to have used as a façade for the importation of arms and window for the training of terrorists,” he said.

He said it was common knowledge in the state that Zanna deceived youths by saying that he would take them on pilgrimage by road only to send some of them for terrorist training.

“Some of the so-called pilgrims by road have been traced to terrorists’ camps in Afghanistan and Syria, and not Saudi Arabia, their preferred destination.

“It is very much on record that 27 of such pilgrims are still missing up till date,” he said.

Sheriff wondered what Zanna’s nephew would be doing in the house of a man he said was his political rival.

He further said that contrary to Zanna’s claims in the media that he had parted ways with the suspect, “we can authoritatively confirm that his nephew, Bama, was still his associate up to the time of his arrest.”

At the SSS headquarters in Abuja, Zanna revealed how he gave his aides N1.5 million to buy Sallah rams for the insurgents and their threat to attack him unless he gave them N10 million.

THISDAY gathered Monday night that Zanna arrived at the SSS headquarters in Abuja at about 1 pm where he was processed for interrogation.

He gave further insight into his relationship with the dreaded Islamist sect and reiterated his denial that Bama was arrested in his Maiduguri home.

He told his interrogators that he gave N1.5 million for Sallah rams to the sect members following their threat to attack him.

He, however, added that when the insurgents accosted one of his aides at gunpoint to know how much he gave him, he lied to them that he (senator) gave out N1 million.

He explained that when they took his aide to his house for a search, they retrieved N250, 000 and left a message with the aide for him that he should provide them N10 million or they would come for him.

The senator, who was released at about 10 pm, is expected to report back at the SSS headquarters by 11am Tuesday.