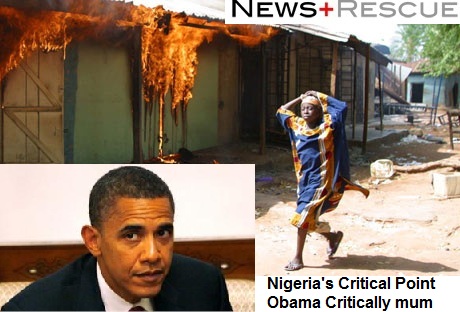 NewsRescue- Few are unaware of the Nigerian terrorism saga, the Boko Haram (western civilization is bad) fringe, extremist group that continues to plague, intimidate and hold the entire nation to ransom.

If they had previously failed to reach global fame, they certainly did so with the August 2011 bombing of the United Nations office in Nigeria, and then the tragic Christmas day bombing last year.

Boko Haram has been responsible for no less than 1000 deaths in the last 6 Months. They have bombed clubs, decimated media houses and government buildings, raided and massacred in Mosques, and now they have resorted to a most pathetic campaign to promote national grief and unrest, gain cheap publicity and intentionally cause sectarian strife and national disintegration. They have chosen to concentrate on bombing Churches.

Boko just found a new explosive device, and one so effective and relatively cheap, it kills more in a day than their bombs used to kill in an entire month.

Worse than a nuclear weapon, worse than biological and chemical weapons- where the agents are limited to their areas of dispersal,- the H bomb is certified to kill and keep killing, once the propellant is finely fractionated and the catalyst, carefully set.

Boko Haram launched this new bomb two Sunday’s ago, and it killed over 100 people in an instant. The government of Kaduna state where the bomb was tested had to put the state on lock down for a straight week, during which the citizenry were only allowed to go out for food and essentials for just 2 hours every day. During these 2 hour outings, the H-bomb was still in effect and more killings occurred.

Yes, you are right, you and I are now the the ingenious new explosive device that Boko Haram intends to use to fulfill its Lord-knows-who-sent-it mission of violently disintegrating Nigeria.

Those of us who killed each other are now mere explosive compounds, mixed together by criminal terrorists with the ability to cause terror. Most conventional bombs are simply combinations of otherwise harmless and often wonderful chemical compounds, that in the right combination and with the right catalyst, explode to cause destruction.

The minds behind Boko Haram decided to capitalize on the shakiness of Nigeria’s Northern Muslim-Christian relationships which have suffered trials and tribulations in the past in the form of death, destruction and even cannibalistic mob actions.

But over all, Nigerians, thanks to a very commendable, tolerant and patient Christian populace and restrain and order called by Muslim leaders and older Muslims, have prevailed these and cohabited. But that seems to be the past as our media and daily’s refuse to describe the events and the predictable progression, for what they are and hence refuse to advice the mutual cooperation needed in this very trying time, when the entire populace is being manipulated and used by those insane terrorists as their new weapon.

The daily’s encourage what they refer to as reprisal attacks, hence creating the very cycle of the-feeling of being cheated, the resentment and hate that will ultimately fuel limitless so-called reprisals and counter reprisals, till Boko sits by their TV’s and laughs their guts out at the success of their new arsenal.

On Sunday the 17th, Boko Haram bombed 3 churches, killing about 20 people. Christian vexed mobs killed an estimated 100 innocent Muslims in the mayhem that followed. Possibly Muslims too at some points killed innocent Christians in the counter insanity that followed, till the government ordered an emergency state lock-down. Records were hidden and a mass burial was ordered by the government to conceal the exact dimensions of what transpired.

But here comes the other point I sadly noticed. You and I have probably done nothing to quell the chain reaction occurring between the vulnerable population of Northern Nigeria. We have not invited all groups to come together and figure out how best to cooperate to squash this menace, rather than be its tool. I must point out at this point, that unlike what the corporate and western media, fools and indoctrinates us to believe, Nigeria is anything but divided roughly into a Muslim North and Christian South. Many Northern states have almost even Muslim-Christian populations and many Southern states, especially in the Yoruba South West are heavily Muslim populated. And the Middle Belt, is simply that, a ‘middle mixture’.

We outsiders see this explosive H-bomb being prepared, but we have not intervened. The United States government recently listed three guys as global terrorists, two of them,- Abubakar Adam Kambar and Khalid el Barnawi, Nigeria’s government had for some weird reason never told us of. The third, a so-called  Abubakar Shekau, the renowned media publicity freak, we only knew of because he put himself out there. We also wonder why the US never mentioned these names to us since. Perhaps some of us know these guys and can bring out their pictures and inform on their whereabouts and get them arrested. But I promise not to bring up any conspiracies here, since I am not a fan of these. Let’s simply accept, we are but mere hapless mortals, not to be told a d*** thing. Made in China, we must be, to wait, hope and pray. ‘E go betta’.

Then again, there’s the delay in listing Boko Haram as a terrorist organization. Why not? Oh, guys say it will impinge on us. I guess less than Boko Haram does. Yes, tell that to the dead from Boko’s bombs, including their latest H-bomb. I say, declare Boko as a terrorist organization today. I saw one group call for this, the one group I have seen that appreciates the problem, in its simplicity, yet complexity, the Nigerian Muslims Against Terror organization, who in addition to other smart things, cried for Boko Haram to be listed asap! Let’s reveal all about them to all security offices globally. Let’s easily deny them funding. Let’s officially terrorize their sponsors. But what will be the fun in that. What do I, again, less than a mere mortal know.

Boko Haram, who have bombed all bomb-able, aren’t yet of status to be declared a terrorist organization. I must say at this juncture, that I am one who has never advocated United States presence and their AFRICOM at-the-ready, practicing and rehearsing, Africa command, any where near my borders. But with the cowardly, desperate barbaric tenacity of Boko Haram, I am inviting temporary specialists to help us contain and eliminate this real threat. The Nigerian police force have to their record, not a single successful case since their inception in 1960 of a solved murder crime. They adequately lack the wherewithal of even understanding, talk-less containing this lousy, yet sophisticated terrorist network, who receive recycled training from global experts in terrorism, from manuals first designed by the CIA in the proxy war against Russia. So we are talking about the worlds most inexperienced and perhaps corrupt police versus the worlds best looney’s, who learn skills still being taught by expert insurgency tailors, to terrorists in Syria for instance.

And with all the guns, bombs and surface-to-air weapons and the like, flowing in our terrain in Africa, courtesy of an idiotically ‘liberated’ Libya; arms and expelled blacks who have already turned over Mali. They are as equipped as our forces aren’t.

These points bring me to the second half of my presentation. The Obama loud silence. Nigeria at 155 Million is Africa’s most populous nation, the largest black nation in the world. A leading oil supplier, Nigeria supplies one quarter- one fifth of US oil needs. Literally one in five American cars runs on Nigeria’s high grade fuel. So if the life’s being lost, the chaos being fomented does not bother president Obama. How about the economic impact? We know the United States does not play with their money, especially not at a time of 99%-er revolutions due to hardships, financial aid and the like. So why is the United States president so perfectly silent about Nigeria’s evolving crises? Again I will not get into any conspiracy, since I am not an advocate of these, so I will not suggest as many have, that the US prepared AFRICOM for this, predicted, planned catastrophic disintegration of Nigeria, before we even saw the signs of any such menace, and that the US, as said by its policy guru, Henry Kissinger, sees ‘conflicts as an opportunity‘ to ‘create a US based New World Order’. No, I won’t say these things. It would be ridiculous thinking to expect a UN resolution before there is a Rwanda-like crises. Prevention and containment is not the way of the powers that be.

Oh, of course, thanks Forbes, indeed, except when it comes to Nigeria’s democratic government and people, voting on laws on public display of Sodomy and same-sex marriage, then of course Obama mentions Nigeria by name and in less than a week,  issues a memorandum, and sets up urgent new global legislature and also threatens to cut all funds (Pardon me for mentioning that this is a paltry $300 Million) to Nigeria’s health and HIV prevention NGO’s.

“…conflicts across the globe and an international respect for Barack Obama have created the perfect setting for establishment of “a New World Order.” -Henry Kissinger at Obama Inauguration

It is rather scary that US top brass view chaos as a useful opportunity to gain world dominance. If this is so, does Nigeria not stand at the risk of being induced into chaos by external governments, to enable US dominate the nation and the Obama led, ‘New World Order’?

Fasten your belts, because as we all aren’t going to act, as we all commit and sign-up to be used as the new H-bomb, it’s going to be one hell-of-a bumpy ride.