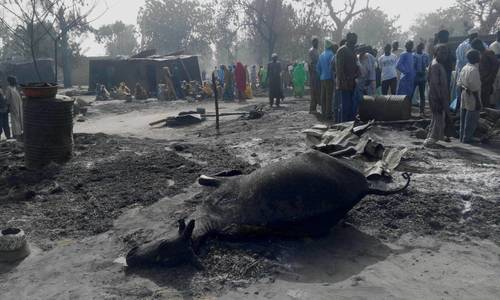 In one of their most heinous massacres to date, militants from the radical Islamist Boko Haram group slaughtered over a hundred victims in a village in northeast Nigeria Saturday night, including a number of children whom they burned alive.

The latest atrocity from the jihadi group allied to the Islamic State took place in the village of Dalori, some three miles from Maiduguri, Nigeria. Vice Chairman of a civilian joint task force in Dalori, Modu Kaka, said that at least 100 dead bodies were taken away but that hundreds are still missing.

Witnesses spoke of “scores of bodies” burned and riddled with bullets lying in the streets after the attack Saturday night. One man, who managed to escape by hiding in a tree, said that he could hear the wails of children screaming in the flames.

Witnesses reported that the fighters ravaged the settlement for four hours, and that three female suicide bombers blew themselves up among people who were fleeing.

Students at nearby University of Maiduguri heard explosions and gunfire, and many fled the area as the conflict raged.

One political science student named Hauwa Ba’na said: “We are crying in our hostel because the explosions are loud and everyone is panicking.”

A Dalori resident, Mallam Buka, decried the lack of protection from the Nigerian military. “We were helpless. Could you believe that there was no military presence in Dalori? The government didn’t provide security to protect us. I lost 11 people, and 5 of our children are nowhere to be found,” she said.

Another resident by the name of Ibrahim Muhammad said that the Boko Haram insurgents had dressed up as military personnel and began opening fire on everybody. “All our wives and children were brutally killed while they looted and destroyed our livestock,” he said.

Boko Haram terrorists began their Islamist insurgency in Maiduguri in 2009, and during their 6-year uprising have killed some 20,000 people and driven another 2.5 million from their homes. –Breibart

In their desperate efforts for reprisal attacks on strong, determined and committed members of the Civilian Joint Task Force (CJTF) and innocent citizens, yesterday 30 January 2016 BHT insurgent launched attack Dalori through Yale from ( rear of Dalori village). An eye witnessed said that the insurgent came in two Golf cars, motorcycles, started opening fire and burning houses. their motive was to cause rancour and penetrate crowd with suicide bombers.

Similarly, while people were running for their dear lives to Gomari Kerkeri village three female suicide bombers attempted to make their way into the crowd but were intercepted and subsequently got blown up. During the incident lives were lost while some people sustained injuries. The insurgents also attempted to penetrate Dalori IDP camp, but the attempt was resisted by the troop which resulted.

In his condolence visit to Dalori, the Theater commander Operation Lafiya Dole Major General Hassan Umaru condole the District Head Alh Lawal Bashir and entire dwellers for the unfortunate incident. He assured the people of Theatre’s commitment inbring insurgency to an end soon.
General Umaru commended the villagers for their resilience and urged them to be strong and committed in the fight againstinsurgency. He also commented NEMA, SEMA, Red Cross and other Stakeholders for their tireless humanitarian efforts.