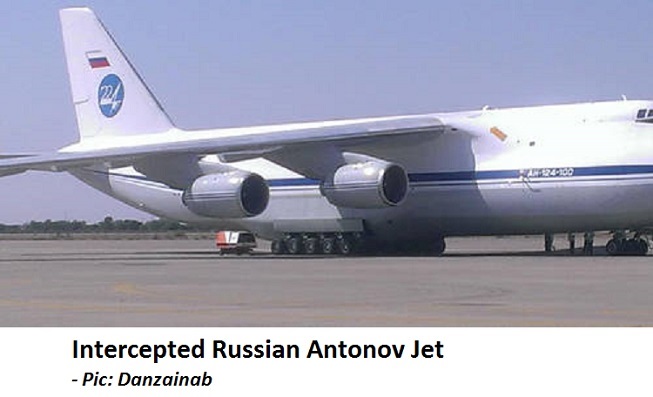 Supersensitive security alert system has intercepted a suspicious Russian made Antonov aircraft with a chopper tucked in it at Aminu Kano International Airport, Kano Nigeria.

PRNigeria gathered that intense investigation is ongoing including using diplomatic means to unravel the mission of the aircraft, its origin and destination.

Competent security sources confirmed that the aircraft and crew are under protective custody pending conclusion of investigation. -PRNigeria

PremiumTimes earlier broke the story and narrated that the plane was en-route Chad, Nigeria’s northeast neighbor. The President of Chad, Idriss Deby is currently under fire for being a Boko Haram sponsor and facilitator and France colonial tentacle.

A Russian airplane intercepted by Nigerian authorities Saturday on its way to neighbouring Chad, was transporting a large cache of AK47s and bullet proof vests, and other items, the News Agency of Nigeria has reported.

Security operatives at the Malam Aminu Kano International Airport, Kano, on Saturday seized the plane which landed at the airport at about 2a.m. as a result of technical problems.

Crew members of the airplane have been detained while investigations are ongoing, NAN quoted a source as saying.

“Security has since been beefed up at the airport in order to ensure proper investigation,” the source said.

The general manager of communication, Federal Airport Authority of Nigeria, FAAN, Yakubu Datti, confirmed the seizure of the plane.

He said the pilot sought permission to land at the airport after the plane developed problems.

“The plane had a technical problem and the pilot sought (for) permission to land at the airport’’, he said.

Mr. Datti said security agencies had since commenced investigation into the matter.

Security sources told PREMIUM TIMES the plane was travelling to N’djamena, the capital of Chad.