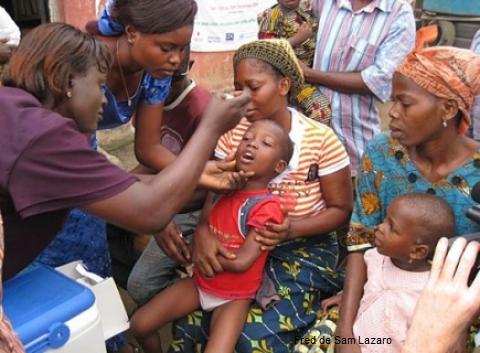 Unknown gunmen suspected to be Boko Haram militants have killed nine female workers involved in polio vaccinations in two separate incidents in the city of Kano.

The gunmen riding on tricycles opened fire on health workers at Hotoro Haye and Shargalle Health Centre in the Kano metropolis as the health workers prepare their polio vaccination cocktails for the day.

Two women were felled by the militants bullets at Unguwa Uku while seven others died from the lethal attack on Shargalle Health Centre in attacks that took place thirty minutes apart.

Police spokesperson Musa Majia confirmed the attacks to journalists stating that the gunmen had fled the scene of the attack before security agents could reach the area.

Several Islamic clerics are opposed to polio vaccination claiming that it was a western scheme to limit Muslim population in Nigeria.
Vaccinators
Polio is spread mainly through poor hygiene and sanitation, problems in much of the developing world. Here, health workers vaccinate children in a Nigerian village.

Barbarians Kill 9 Women in Kano: You Will Meet A Painfull Doom

We MuslimsAgainstTerror totally condemn and pray Masha Allah for the hasty judgement of Allah(S) upon the people who can not be called Muslims, that killed 9 women in Unguw Uku, Kano today.

We know that Datti Ahmad used to preach against vaccines, we have discussed the danger of this type of messages before. You can have your distrust about vaccines, but wallahi for you to kill women delivering a service is straight into the fire and all those who direct you to do this are all in the fire!

Stop, O people, that I may give you ten rules for your guidance in the battlefield. Do not commit treachery or deviate from the right path. You must not mutilate dead bodies. Neither kill a child, nor a woman. nor an aged man. Bring no harm to the trees, nor burn them with fire, especially those which are fruitful. Slay not any of the enemy’s flock. save for your food. You are likely to pass by people who have devoted their lives to monastic services; leave them alone”

So even in a war, a Muslim has his boundaries, and this is not a war, but these people, all of whom have no Islamic learning and are merely hired assassins, paid to give Islam a stain, they kill people at will.

AND THERE IS NO WAR! EVEN!

Dear brothers, please continue doing your obligations as Muslims and exposing these rats to the security services. they are the worst of mankind, Rasul(S) said if he was here in the end time when these people are doing these barbaric acts, he, Prophet Muhammad(S) will be the first to KILL THEM himself.

“A people will come out at the end of times, immature, foolish and corrupt. They will hold the discourse of the best of creation and recite Qur’an, but it will not go past their throats. They will pass through religion the way an arrow passes through its quarry. If you find them, kill them, for verily whoever kills them will have his reward from Allah the Day of Judgment.”

This is our duty dear brothers, to protect our deen and expose the Munafikeens.

May Allah in his infinite mercy grant the victims the fortitude to bear the loss.

Barbarians Kill 9 Women in Kano: You Will Meet A Painful Doom