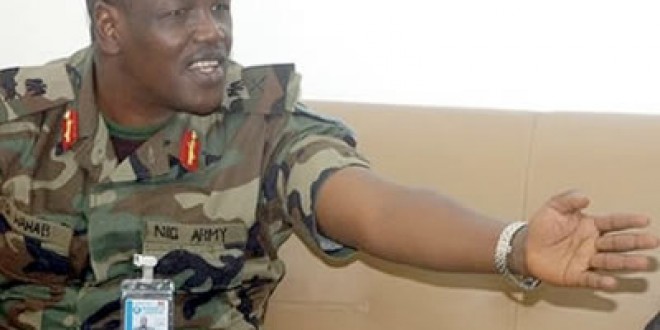 The General Officer Commanding (GOC), 1 Division Nigerian Army, Kaduna, Major-General Garba Wahab, at the weekend said the media should not eulogize criminals as the Division has arrested a suspected orange seller who spied for terrorists and over N600 million was found in his bank account within three months.

The GOC, whose area of command covers the north-western states, while fielding questions from newsmen in Kaduna relating to why the Army is carrying out general search without discrimination, said, “When we stop those who are hawking and carrying wheelbarrow, and we said we want to check, people will shout, ‘Why are you disturbing the average person?’ And I give you example; we arrested somebody here called mai lemu (orange seller) in Kawo here. And in three months when we checked through his account, over 600 million naira has passed through that man’s account, and he sells orange here by Kawo bridge.

“He is there as a lookout. He is like a spy. He looks around, gets information and feeds these guys, says this is what is happening. That is why I said we are not dealing with idiots. We are dealing with people who have one or two guys working and thinking, and giving them information. And we know that before they attack they must look at the softest locations.”

Wahab added that it is a criminality that the media and society must cooperate and ensure that it is brought to an end.

On Thursday’s attacks in Daura, he explained that military personnel adhered to the principles of rules of engagement, saying, “I called this press conference to fill the gap on the attack that occurred in Daura, Katsina state. We don’t want a situation where people will be speculating. Yes, the criminals came, they bombed vehicles, and they packed money using improvised explosive devices (IEDs) to bomb everywhere. Nobody will give an instruction for an innocent life to be lost, so in whatever we do, we keep to the rules of engagement given to us and that is why I have called the media to lend us their support because when a few reports go out, it’s like it is encouraging the criminals and they start to think they have the upper hand.”

Meanwhile, the presidency yesterday offered amnesty to any Boko Haram member who surrenders, as it wages war on the insurgents in Borno, Yobe and Adamawa, where state of emergency was declared last Tuesday.

Special Adviser to the President on Media and Publicity, Dr. Rueben Abati, revealed this yesterday while talking to Reuters, a foreign news agency, on telephone.

He said: “Mr President has urged Boko Haram members to surrender their arms and embrace the amnesty option which is still open as the committee is working on the option of dialogue for a peaceful resolution.” Link: http://pointblanknews.com/pbn/news/suspected-boko-haram-spy-had-600-million-in-his-account-maj-gen-garba-wahab/