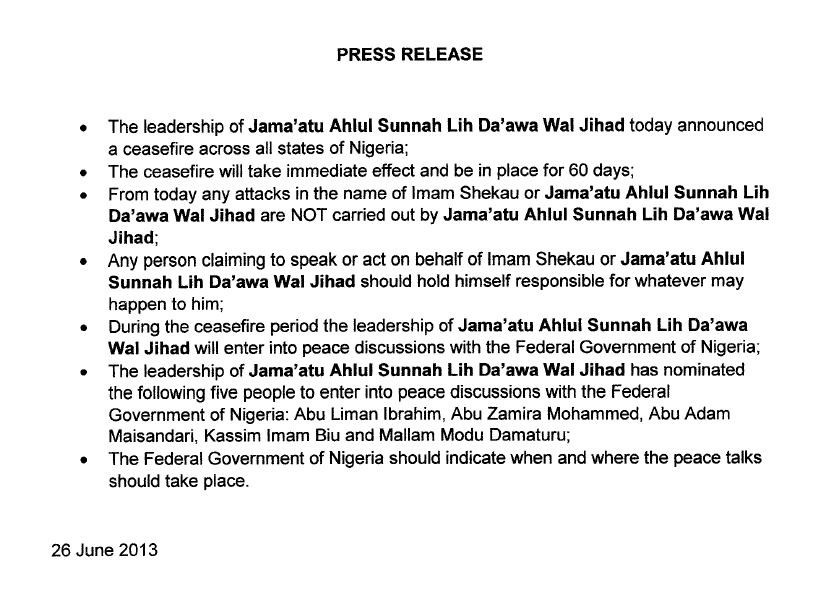 NewsRescue- In an exclusive report on NigeriaVillageSquare, Boko Haram terrorists are begging the Nigerian government for a ceasefire. A release from the terrorists who have been seriously decimated under a full scale military and civilian war, waged since May 14th this year, sent a pleading letter to the Nigerian government on June 26th, 2013, promising to ceasefire for 2 months for negotiations. See: Exclusive Pictures of Bombed Boko Haram Members, Behead Vicitm in Nigeria’s Terror War

Nigeria’s government has not yet publicly indicated the receipt of this plea, nor released any statement on their reactions.

It will be a betrayal of the Nigerian citizens and most especially the brave men of the Nigerian army and civilians involved directly in the successful war against this sect–from which many have lost their lives–which has been able to push the terrorists into the mountains, if the federal government shows any form of abatement in the war on terror, to allow these criminals and murderers regroup and have impunity to associate in the society.

At this stage of the war, the Jonathan government is expected to double-up on its campaign and rend its full support to the Military men and civilians to soon completely wipe out this menace to Nigeria and larger west Africa.

In more tactical successes, Nigerian military and civilian JTF have been identifying suspected Boko Haram sponsors. Recently detained was the Borno ANPP chairman, Mala Othman, who was arrested by the military JTF this Saturday and stands accused of supporting the group.

Other top level suspected masterminds of the terrorist group, include a former governor of Borno state, Alhaji Modu Sheriff and a serial NSA of Nigeria, spymaster Aliyu Mohammed Gusau, under whose watch as Nigeria’s top intelligence officer, Boko Haram was concealed to arm and evolve. Nigeria’s government is yet to take decisive steps against the other top level sponsors of the extremist terrorists who have been responsible for over 5000 deaths of innocent citizens.

The United States government has also recently put a bounty of $7 million on the head of the leader of the globally dangerous terrorists, who goes under the sobriquet, Abubakar Shekau.

Days after the so-called announcement of a ceasefire, elements of the group have launched deadly attacks on a police station and this Saturday, launched a cowardly attack on a secondary school in which over 30 students and staff were massacred.

Below is an excerpt from the Boko Haram plea report:

The leadership of Jama’atu Ahlul Sunnah Lih Da’awa Wal Jihad (JAS) more commonly known as Boko Haram is announcing a ceasefire across all states of Nigeria according to a press statement released by the organization.

NVS is working to get an official reaction to this statement.

This announcement follows back channel discussions that have been secretly conducted with the Boko Haram leadership for more than two years, after a series of failed military approach.

May/June 2013: Recent peace discussions has led to drop in Violence

Through Zamira Shekau and the JAS leadership group agreed to a ceasefire if women held by the military were released.

The recent release of women held by the Nigeria military without charges was authorised by President Jonathan. This was a major breakthrough in establishing goodwill between Boko Haram and the Federal Government. Subsequently on 19 June 2013 Shekau sent a message with an emissary nominating five people, including Abu Zamira Mohammed, to participate in peace dialogue and sign a peace agreement. Two of the five were well known to the Government.  This group was authorised to conduct further discussions and issue a statement regarding a ceasefire.

As a result of subsequent discussion, on 26 June 2013 the leadership of Boko Haram authorised the release of a statement declaring a ceasefire for 60 days effective immediately. The statement noted that during the ceasefire period meetings will take place between JAS and the Federal Government of Nigeria to agree and sign a Peace Accord.

There has been a noticeable drop in assassinations and suicide bombings during the recent peace discussions.

Government yet to respond

While the Federal Government of Nigeria is yet to respond publicly to the JAS ceasefire statement it is understood there has been tacit agreement between JAS and the Government to proceed with peace discussions. The JAS leadership has since been consulting all commanders to assure compliance with the ceasefire.

“WE are seeking forgiveness from the people over the number of people killed in the country.

I appeal to those who lost their loved ones to our activities to forgive us and on our side we have forgiven all those who committed atrocities against us. I  want to state clearly that we have no hands in the unfortunate attack on the secondary school (Government Secondary School, Mamudo, Yobe State).”

With these words, Imam Muhammadu Marwana, an influential member of the Abubakar Shekau-led Boko Haram sect, yesterday, confirmed a ceasefire agreement with the Federal Government to end their deadly activities across most states of Northern Nigeria, which have claimed about 4,000 lives and destroyed properties worth billions of Naira since 2009.