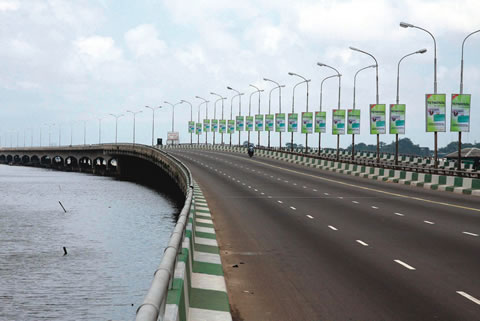 THE security and intelligence community chiefs that talked about the vigilance that prevented the planned attack of Lagos three weeks ago failed to disclose to the public the magnitude of weapons the masterminds of the terror act had deployed for the failed operation and the main target, The Guardian’s inquiries have revealed.

The Guardian Intelligence Unit learned at the weekend from the authorities concerned that apart from the deadly weapons uncovered, the arrested attackers’ main target was the strategic Third Mainland Bridge in Lagos.

According to revelations at the weekend, the attackers surreptitiously conveyed the weapons to Lagos inside some of the numerous fuel tankers that ply major roads to Nigeria’s former capital and indeed Nigeria’s commercial nerve centre.

The Guardian learnt at the weekend that indeed the Federal and Lagos State authorities were quite startled that the masterminds of the planned terror act could pile up weapons of mass destruction in Lagos, generally considered the safest haven for investment at the moment in Nigeria.

It was learnt that the Lagos State authorities, including the governor, were shown the illegal arms that the security and intelligence community’s interagency co-operation confiscated recently. “They were shocked, really shocked when they were shown the level of organisational capacity of the evil ones that planned to attack Lagos…”,  a top source disclosed last week.

In a related development, security chiefs that briefed the National Assembly top-shots last week about the reality of the planned attack of Lagos reportedly told the federal legislators that indeed the attackers had planned to attack Lagos to cripple the economy. Lagos is the commercial nerve centre of Nigeria. Former Head of State, the late Gen. Murtala Muhammed, had in 1976 recognised the strategic importance of Lagos even while he was announcing the creation of Nigeria’s new capital Abuja then.

His words in a national broadcast to the nation on January 3, 1976: “… Lagos will, in the foreseeable future, remain the nation’s commercial capital and one of its nerve centres. But in terms of servicing the present infrastructure alone, the committed amount of money and effort required will be such that Lagos State will not be ready to cope.

“It will even be unfair to expect the state to bear this heavy burden on its own. It is therefore  necessary for the Federal Government to continue to sustain the substantial  investment in the area. The port facilities and other economic activities in
the Lagos area have to be expanded.

“There is need in the circumstances for the Federal Government to maintain a special defence and security  arrangement in Lagos which will henceforth be designated a special area. These arrangements will be carefully worked out and written into the new constitution. Kaduna and Port Harcourt are to be accorded similar status and
designated as Special Areas…”

The Guardian Intelligence Unit learnt that the security chiefs told the federal legislators and their presiding officers that some of the attackers captured had hinted that the plan of attack on Lagos was deliberate: to cripple the nerve centre of Nigeria’s commerce and industry, a city that plays host to the international air and sea ports so that Nigeria’s economy could collapse.

It was said that the insurgents had reasoned that since they had successfully crippled business operations in the North, there should be federal character spread of the destruction, as even the East and South-South geo-political zones too have been negatively affected by the insurgency and kidnapping. The federal legislators were said to have been alarmed by a revelation about the sense of urgency of the insurgents to hit Lagos “just to make Nigeria ungovernable for the present administration”, as it was revealed. Link: http://www.ngrguardiannews.com/index.php?option=com_content&view=article&id=118329:how-boko-haram-planned-to-bomb-third-mainland-bridge&catid=1:national&Itemid=559