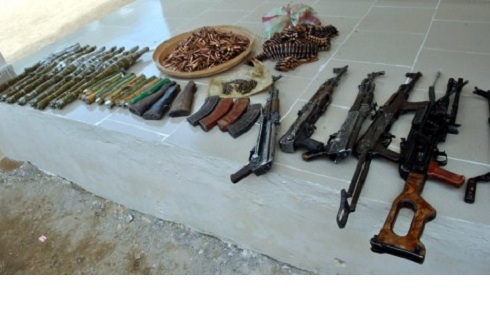 Mr. Abdullahi was breaking his fast, along with two of his friends, in front of his house in Gwange at about 6.30 p.m., when the gunmen attacked him.

“Two teenagers appeared on foot with AK-47 rifles and sprayed bullets at them,” Usman Kolo, a relative of the deceased said.

Mr. Kolo said that Abdullahi died instantly while one of his friends escaped with injuries.

“One of his friends was hit on the leg by bullet. He was later rushed to the hospital for help while the other escaped unhurt,” he said.

Gideon Jibrin, the spokesman for the Borno State Police Command, confirmed the incident, saying that the police had commenced investigations into the killing

Also in Maiduguri, the Joint Task Force (JTF) in Borno State, Operation Restore Order, Friday, displayed a large number of arms and ammunition, it recovered after an operation in Maiduguri.

“A raid was conducted in Maiduguri metropolis leading to the recovery of large arms,” he said.

Mr. Ebhaleme also announced the arrest of two suspects believed to be behind anonymous text messages in the metropolis, asking people to pay money or be killed.

“Members of the public are reminded to always report such threat to security agencies early enough for prompt action,” he said.