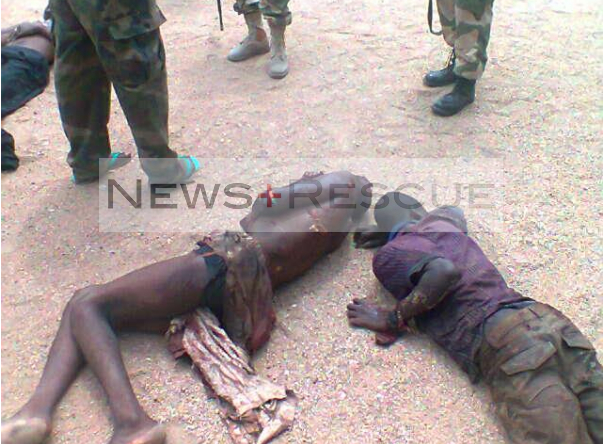 A Maiduguri-based businessman (name withheld for security reasons) on Thursday turned in his biological son, a member of the extremist Boko Haram sect to the Joint Task Force, JTF, with an order that he should be shot dead, witnesses said.

The son, according to close family sources, had once threatened to kill his father before he fled home and returned only recently as security operatives continue to clamp down on the sect.

He was said to have returned as a prodigal son, seeking asylum in his father’s compound.

“After confessing all his crimes, including how he participated in the killing of people and looting of banks to his father, the old man said he has no such conscience to keep a killer son in his home,” said a close family member under anonymity.

The 60-year old Kanuri man, who lives in Babban-Line Commercial Area, Maiduguri, simply approached the Sector Office of the JTF and told them about his son.

Witnesses quoted him as saying, “This boy is my son; he is a confirmed member of Boko Haram and has killed many people, he too should be killed.”

In a dramatic twist, as the young man attempted to flee from the soldiers to whom his father handed him, he was shot at and struck down by a bullet.

He later died. His father, who was yet to leave the scene simply turned around, looked at the writhing body of his son on the ground and said, “Masha Allah” meaning, “To God be the glory.”

Before he was handed over to the soldiers, the young man was said to have revealed to his father and family members that he possessed two cars and had millions of naira buried somewhere near his family home.

But the reportedly father said he had no interest in the ill-gotten assets and had no intention of inheriting them as according to Islamic laws, they are ‘haram’ (unlawful).

NewsRescue– It can be recalled that Umaru Abdul Mutallab, the father of the Christmas day US attempted “undearwear bomber,” had likewise reported his son to US authorities, who allowed him slip through to commit the scare.

(CNN) — The father of a man suspected in a botched terror attack aboard a Northwest Airlines flight contacted the U.S. Embassy in Nigeria recently with concerns his son was planning something, a senior U.S. administration official said Saturday.