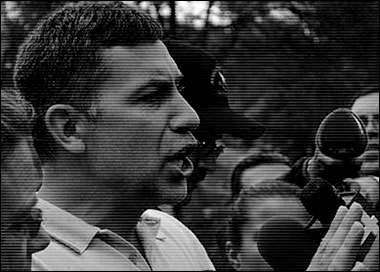 Some believe mysterious and absent Misha was Tsarnaev’s FBI handler

According to new research, Uncle Ruslan, aka Ruslan Tsarni, was married to the daughter of former top CIA official Graham Fuller.

This is an interesting discovery considering Tsarni is at the forefront of the effort to convince the American people that Tamerlan Tsarnaev, the alleged and now dead Boston bomber, was “brainwashed” by a shadowy Armenian named Misha.

“This person just took his brain. He just brainwashed him completely,” Uncle Ruslan insisted during a news conference.

“Tamerlan’s relationship with Misha could be a clue in understanding the motives behind his religious transformation and, ultimately, the attack itself,” the Associated Press argued earlier this week.

Problem is, nobody can find Misha to verify the claim. “Efforts over several days by the Associated Press to identify and interview Misha have been unsuccessful,” the AP admits.

Some believe the mysterious and absent Misha was Tsarnaev’s FBI handler. More than likely, Tamerlan was radicalized by the CIA, not some Armenian who is now conveniently missing.

Considering the large number of patsies set-up by the FBI and then busted with triumphant headlines used to extend and extoll the manufactured war on terrorism, this possibility cannot be discarded.

“The discovery that Uncle Ruslan Tsarni had spy connections that go far deeper than had been previously known is ironic, especially since the mainstream media’s focus yesterday was on a feverish search to find who might have recruited the Tsarnaev brothers,” writes Daniel Hopsicker.

Tsarni also had connections to USAID – the outfit involved in overthrowing governments and related skulduggery – and Halliburton.

Of course such pertinent details have yet to make their way into the establishment media’s non-stop script reading on the Boston bombings and the orchestrated effort to pin the blame on the Brothers Tsarnaev who are obviously witless patsies.

Unlike many previous attempts to manufacture terrorism for propaganda purposes, this time around there are a large number of inconsistencies and outright falsehoods.

Naturally, all of them are ignored by the corporate media as it hammers out a narrative that will be used to steal more constitutional rights from the American people.

NewsRescue- In other news on the main stream media, Tamerlan’s mom is being discredited and accused of almost being a terrorist for having discussed “vaguely,” on a taped conversation with her child about him going to Palestine to join the Palestinian cause against what former US president Jimmy Carter called an “Apartheid.” There were no revealed conversations of any thoughts of terror in the US.

DEBKAfile, a top Israeli intelligence journal and InfoWars have described the Tamerlan as a likely double agent who assisted the US in missions in Chechnya.