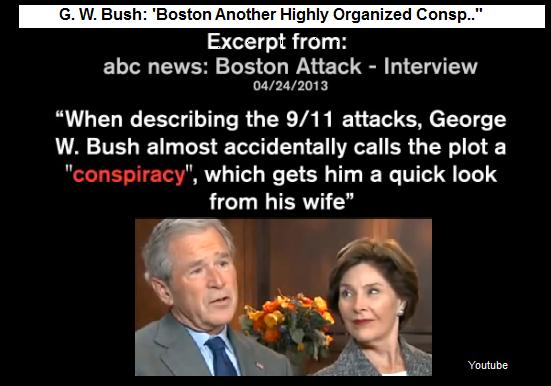 From the abundance of the heart, the mouth speaketh.

George W. Bush has suggested that the Boston bombing could have been a wider organized plot, suggesting that the attacks were a conspiracy during an interview with ABC News.

Asked by ABC’s Dianne Sawyer if the Boston bombing reminded him of 9/11, Bush responded, “At first I was deeply concerned that there might have been an organized plot,” before adding that he thought the attack may have been “another consp” (Bush appeared to be saying the word ‘conspiracy before he stopped himself, before continuing, “Another highly organized attack on the country and it still may be.”

While Bush almost described the bombings as a conspiracy, his wife glared at him.

Bush has made numerous statements in the past that have raised the eyebrows of those who are skeptical of the official narrative behind terrorist attacks, including a speech before the UN shortly after 9/11 during which he remarked, “Let us never tolerate outrageous conspiracy theories concerning the attacks of September the 11th.”

The YouTube community responded to Bush’s statement by noting how his wife Laura reacted.

“Look at Laura’s eyes at the exact moment he utters “another consp”. She gets extremely wide eyed for a slightest moment. Pretty revealing,” wrote one.

“Notice how at about 0:40, when the word “consp..” came out of his mouth, his wife’s eyes got bigger for a second. She definitely reacted to what he had said, as she looked directly at him, cuing him to cut it short and choose anther word,” added another. -Infowars

Indeed “protecting the homeland” is difficult and involves doing many things.

These look like the kind of blunders that get Bush “chocking on pretzels,” later at Night. 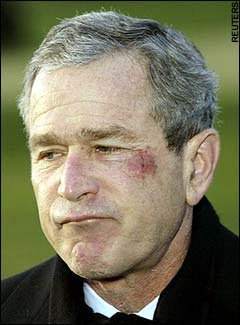