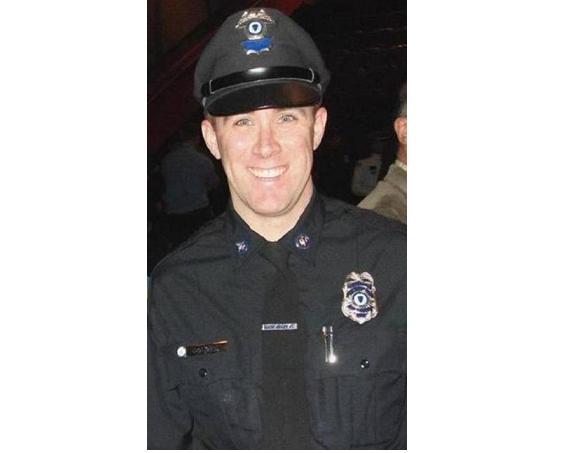 Eyewitness accounts strongly suggest that MBTA Transit Police Officer Richard H. Donohue Jr. was shot and nearly killed by a fellow officer in Watertown April 19 during the hail of gunfire unleashed on Dzhokhar Tsarnaev as the suspected terrorist made a getaway in a carjacked sport utility vehicle.

Donohue went down in the early-morning darkness during an extraordinary gunfight in which at least a dozen police ­officers from four departments exchanged up to 300 rounds of gunfire with Dzhokhar’s older brother, Tamerlan Tsarnaev. The Tsarnaevs also allegedly set off explosives, including a pressure cooker bomb similar to the ones used in the Boston Marathon bombings.

Jane Dyson, who lives 140 feet from where Donohue was shot on Dexter Avenue, said she saw the police officer collapse and fall to the ground near the end of the gunfight as 19-year-old Dzhokhar Tsarnaev sped away. She said the officer ­appeared to be a victim of “friendly fire.”

“A black SUV appeared, and rapid gun fire was focused on the vehicle,” Dyson wrote in a statement provided to the Globe, referring to the vehicle Tsarnaev allegedly drove in his escape. “It appeared to me that an individual at the corner [of the street] fell to the ground and had probably been hit in the gunfire.”

“I later learned that the individual who had been shot was Officer Richard Donohue,” she wrote.

It would later become ­apparent that the suspects were no longer armed when Dyson saw Donohue fall, suggesting that the shot that wounded him came from police. Two witnesses support Dyson’s account that Donohue appeared to be wounded in the final volley of shots fired at the fleeing younger suspect.

None of the witnesses faulted police. “I don’t second-guess the actions the police took to stop these terrorists,” Dyson said in an interview. “The police did a great job.”

Dyson said she had offered to make a statement to police.

The shooting of Donohue is the most serious of three possible accidental shootings during the hunt for the suspected bombers now being reviewed by the Middlesex district attorney’s office and the State Police as part of a broader criminal inves­tigation.

In a second incident, another Transit Police officer was slightly wounded, while the third incident involved damage to a police vehicle.

But no matter what the inves­tigation concludes, it will not take away from the bravery of officers who put their lives on the line, a State Police spokesman said.

“Considering the chaos on those dark streets, where a pair of homicidal terrorists were firing shots and throwing bombs at police, the fact that friendly-fire incidents may have ­occurred detracts nothing, not one bit , from the valor and heroism of the officers and troopers who caught up to them that night,” David Procopio said.

Nationally, about two police officers per year are killed by friendly fire, excluding training exercises, according to data collected by the FBI. The 22 friendly-fire deaths nationally over the last decade include cases in which officers mistook a fellow officer not wearing a uniform for the suspect.

The Watertown shootout was highly unusual in that officers from as many as six agencies converged on the suspects in the middle of the night, with officers having little time to coordinate efforts. It is still unclear exactly how many of the officers fired their guns, though it was at least a dozen from four agencies.

“It’s arguably a wartime situation,” said Chuck Wexler, executive director of the Police ­Executive Research Forum, a Washington nonprofit that conducts research on law enforcement. “Police agencies are not generally prepared for the kind of wartime situation that these officers encountered.”

Donohue and his partner were among the first officers to arrive at the intersection of Dexter Avenue and Laurel Street, moments after the ­Tsarnaev brothers pulled over in the SUV they had allegedly carjacked in Allston.

In the ensuing 10 minutes, police officers fired what may be an unprecedented number of rounds in a single police incident in recent state history. They apparently wounded both suspects, but also sprayed the neighborhood. Shots fired in the battle left at least a dozen nearby houses pockmarked with dozens of bullet holes, includ­ing a second-floor bedroom where two children slept.

Donohue suffered a three-quarter inch bullet wound to the top of his right thigh and nearly bled to death at the scene; “he was deceased,” as one emergency medical provider described him. Besides that shooting, authorities are also investigating an incident in which another MBTA Transit Police officer was grazed in the buttocks by gunfire. The identity of that officer and the circumstances of his shooting have not been disclosed.

Build up on Alternate Media Account of Boston Bombing

Eyewitnesses to the shootout involving the alleged Boston bombers have thrown up another contradiction to the official narrative, asserting that MBTA Transit Police Officer Richard H. Donohue Jr. was not shot by Dzhokhar Tsarnaev but by other cops in a friendly fire incident.

Previous media reports had blamed the Tsarnaev brothers for the shootings of both MIT campus police officer Sean Collier and Donohue, feeding the narrative that the suspects were engaged in a desperate attempt to flee police by returning fire and throwing improvised bombs.

However, as we previously highlighted, footage from the raid suggests the brothers may have been trying to surrender as they came under a barrage of gunfire. Audio from the scene captures the suspects yelling, “chill out” and “we didn’t do it,” as bullets seem to fly in one direction only.

Add this to the claim of the aunt of Tamerlan Tsarnaev, that the footage which emerged of police arresting a naked uninjured man was her nephew, contradicting the official narrative that Tsarnaev was critically injured in a shootout and suggesting he may have been killed while in custody, and it’s easy to see why some are questioning whether the raid unfolded exactly as authorities claimed.

Eyewitnesses to the shootout also contradicted claims by police that Dzhokhar Tsarnaev ran over his own brother in a car, stating instead that he was run over by police.

“Eyewitness accounts strongly suggest that MBTA Transit Police Officer Richard H. Donohue Jr. was shot and nearly killed by a fellow officer in Watertown April 19 during the hail of gunfire unleashed on Dzhokhar Tsarnaev as the suspected terrorist made a getaway in a carjacked sport utility vehicle,” reports the Boston Globe.

Witnesses who lived close to the scene of the shootout said they clearly remember Donohue falling to the ground while Dzhokhar Tsarnaev was speeding away in an SUV.

“A black SUV appeared, and rapid gun fire was focused on the vehicle,” Jane Dyson wrote in a statement provided to the Globe. “It appeared to me that an individual at the corner [of the street] fell to the ground and had probably been hit in the gunfire,” adding that the officer appeared to be a victim of “friendly fire.”

The report notes how the suspects were no longer armed at this point, “suggesting that the shot that wounded (Donohue) came from police.”

In addition, when cops apprehended Dzhokhar Tsarnaev the next evening he did not have a gun and only one other gun was found at the scene of the shootout, again confounding claims that the brothers could have returned anything near the 300 rounds ammo police fired at them.

The fact that Dzhokhar Tsarnaev was unarmed before he was caught also debunks initial claims by authorities that he had engaged in a “shootout” with cops while hiding in a boat.

Donohue almost bled to death at the scene and was in critical condition when taken to hospital but is now expected to make a full recovery.

Skeptics of the official story suggest that the brothers could have been just two members of a wider plot or that they could have been convenient patsies, having allegedly been under the tutelage of the FBI for years before the bombings.

The suspects’ mother Zubeidat Tsarnaeva continues to insist that her sons are innocent, telling the Associated Press last week, “It’s all lies and hypocrisy.”

Friendly fire incidents involving police have become commonplace across the United States. An incident outside the Empire State Building last August in New York left 9 people injured as police fired wildly during a shootout with a gunman. During the Christopher Dorner manhunt in February, LA cops also fired at numerous innocent people they mistook for Dorner.