The editor of the Boston Police Department’s union newspaper has a message for Occupy Wall Street: you’re a bunch of ignorant idiots — and your kids are stupid too.

Officer James W. Carnell, a veteran of the Boston PD and the managing editor for Pax Centurion, has penned a scathing op-ed in the latest issue of the official newspaper of the Boston Police Patrolmen’s Association. Responding to a letter to the editor sent in from a world-renowned college professor and activist, Carnell calls out the Occupy Wall Street movement and its protesters for seemingly being responsible for everything that is wrong with the country today.

Carnell’s crusade against Occupy took a harsh turn earlier this year when the officer opined in the paper’s January/February 2012 edition that the protesters demonstrating against corporate greed in the heart of Boston were “deranged rich kids and aging hippies” who led “stupid marches through downtown,” took drugs, stole from others and engaged in sex with “stupid college girls who offered themselves willingly to the poor and downtrodden victims of oppression” 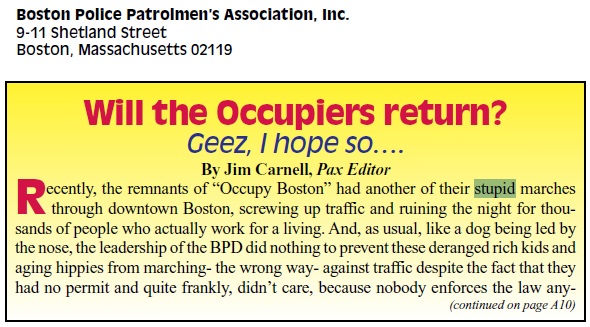 His sentiments did not sit well with protesters.

“I was horrified, disgusted and utterly consumed with the things you had to say about Occupy Boston,” teacher Bil Lewis wrote Carnell in a letter that is published in the most recent edition of the newspaper.“I don’t see how you could say what you said if you spent any time at Dewey Square,” Lewis continues, referring to the central space occupied by demonstrators until the police department waged a forced evacuation late last year. “I spoke with officers regularly and I got a lot of support. Most of them understood why we were there, even if they didn’t agree with our tactics.”

“As a teacher, I don’t get to choose my students, but I have to do my best for them, even the ones I don’t like,” Lewis adds. “I cannot believe that a Boston Police officer would actually so discount the Constitution, so disrespect his fellow citizens and so blindly worship authority.”

Alongside Lewis’ letter, Pax Centurion has provided a full-page response from Carnell, who doesn’t hold back at all this time with what he explains are the police’s true feelings about occupiers.

“You say you ‘spoke with officers and got a lot of support’?” asks Carnell. “Bil, let me let you in on a trade secret: they were bullshitting you. They were laughing at you while pretending to agree with your stupid group and the assembled morons from privileged backgrounds who took over public property and destroyed it.”

Elsewhere in the issue, Carnell writes that he encourages Lewis to “organize a community meeting, bang some bongo drums and invite me as your guest speaker. I’ll bring the tofu and brown rice. You start the line-dancing with the grey haired Jamaica Plain and Cambridge aging hippies.”

“Most police officers have to remain quiet because of our positions, but I have the luxury of speaking on behalf of what 99 percent of police officers really think about you and your occupies,” he adds. “Why don’t you and your fellow occupiers go find a sandbox . . . where you can protest injustices, stamp your feet, scream and yell and then go home to Mommy and Daddy and eat quiche, brie and have a good long slug of Chardonnay?”

From there, the board member of the Boston Police Patrolmen’s Association attacks the students of Lewis, without actually taking the time, apparently, to see who he was arguing with. Lewis has in the past served as a computer scientist at Sun Microsystems and has also taught at acclaimed institutions such as Tufts University, MIT and Stanford.

“I noticed that you identified yourself as a teacher,” writes Carnell. “Aha! No wonder this country is filled with so many young idiots who don’t know history, geography, math or classical literature, but can sing North Korean-style songs praising Obama!”

“Perhaps, Bil, if you spent less time at Occupy Boston and more time instructing students in how to think critically, we might actually have students who can find Europe on a map? Then again, too many liberals like yourself indoctrinate students, rather than teach matters of substance. Liberals act on emotion and feelings, conservatives use logic and support.”

On his public Facebook page, Lewis has posted the link to the officer’s response, saying that Carnell is “clearly aware of the role he’s chosen to play.”

“Talking to cops randomly on the street, every single one looked askance when I mentioned Officer Carnell, and said something like ‘Not all of us agree with everything in the newsletter.’ I not quite sure what I’m going to do,” adds Lewis.

On their website, Pax Centurion explains that opinions expressed in the paper are not necessarily those of the union. They also say that, yes, freedom of expression is recognized within the bounds of good taste.