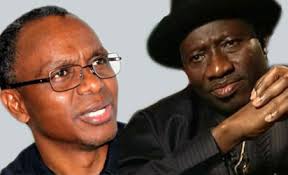 ABUJA — THE Senate,  yesterday, vowed to probe former Presidents Olusegun Obasanjo and Goodluck Jonathan as well as ministers who served under them to correct alleged violation of the master plan of the nation’s capital city.

Addressing journalists, yesterday, Chairman, Senate Committee on Federal Capital Territory, Senator Dino Melaye (APC, Kogi West), who did not exempt any former Minister of the FCT or President in the proposed probe, said as a government of change, it was prepared to send any one found guilty to Kuje Prison which he said was not far from the Federal Capital City, FCC.

Melaye, while condemning what he described as the bastardization of Abuja Masterplan, however, expressed worry over why former FCT ministers allocated green areas designed for flood drains, city buffers, recreations, urban farming, reserved land and undevelopable areas to themselves and their friends.

The probe may also be extended to former Presidents because by the law establishing the FCT, the President is the governor-general of FCT who appoints a minister to administer the city on his behalf. Melaye said: “With this administration of change, it is no longer going to be business as usual. Permit me to remind FCT administration again by stating that this committee will not hesitate to ensure that all administrative anomalies, misappropriation of funds or misapplication of laws as the case may be, occasioned by the past administrations of FCT, are fully addressed. This is what justice demands in these circumstances; to right the wrongs.

“Therefore, the committee is worried and frowns on satanic and misleading advice and recommendation to convert very important and beautiful natural endowments or features which are very scanty like the world acclaimed Maitama Hills, popularly known as Ministers’ Hills, which could serve as a tourist attraction to the residents of FCT. “I want to state here again that if the bourgeois of this country need a special allocation, a new district can be dedicated to them and not destroy the beauty of the city centre, a national monument like the Maitama Hills.”